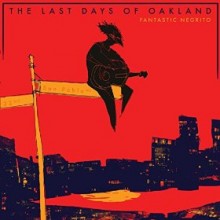 Title: The Last Days of Oakland

Perhaps best known as the 2015 winner of NPR’s Tiny Desk Contest for his song “Lost in a Crowd,” Oakland-based Fantastic Negrito releases an album that is steeped in the blues and simultaneously strikingly contemporary.  Xavier Dphrepaulezz, who uses “Fantastic Negrito” as his stage name, has had a career rocked with the ups and downs of the entertainment industry—rising to, and falling from, a disastrous brush with stardom in the 1990s, undergoing a crippling hand injury after a car accident, and settling down for awhile. The stage persona of Fantastic Negrito represents a return to the entertainment business, on his own terms this time around.

And what a return—The Last Days of Oakland is an album with sprawling ambitions that delivers.  One more in a year of highly personal releases that document broader societal problems, Fantastic Negrito’s songs deal with class and poverty (“Working Poor,” “Hump Through the Winter”), race, and redemption (“Nothing Without You”).  The record is also diverse sonically, but it’s useful to compare the combination of blues sound and punk spirit that animates The Last Days of Oakland with the blues punk of groups like the White Stripes. In fact, Negrito takes a number of cues from Jack White, from vintage blues guitar playing to minimalistic 4-on-the-floor arrangements—“Rant Rushmore” could easily have appeared on Icky Thump, although Negrito draws a bit more gospel into the mix than White would have. Comparisons to earlier alt-rockers are not remiss either.  Fantastic Negrito’s version of the traditional song “In the Pines” (recorded by everyone and his brother, but perhaps made most famous by Leadbelly), channels Kurt Cobain’s rendition of the song as “Where Did You Sleep Last Night” on Nirvana’s 1993 MTV Unplugged, keeping Cobain’s raw emotionalism, but fleshing out the orchestration with a full band, electric guitars, and keyboards.

On The Last Days of Oakland, we hear a musician who has clearly paid his dues.  Fantastic Negrito knows his sound and has found his voice as a singer, songwriter and guitarist.  This is a definitive performance from a rocker with a few bones to pick.