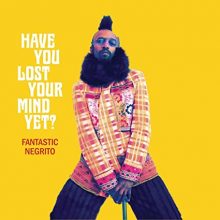 GRAMMY award winning artist Fantastic Negrito has returned with his new album, Have You Lost Your Mind Yet?  While the Oakland native’s 2018 release, Please Don’t Be Dead, focused on songs that embrace love and unity, the musical framework for his new project more closely mirrors the pressing issues in the current social, economic and political climate. Using his signature rock-soul style, he presents timely topics such as the benefits of communication, particularly during the pandemic, when so many are battling with or recovering from mental illness. Negrito believes that if we talk more openly about what’s happening in our lives, we can work toward finding healing within our communities by eliminating isolation.

Tracks such as “I’m So Happy I Cry,” featuring Tank and the Bangas, address the ways we struggle with confronting our own issues. As Negrito sings, “All the things that made me high now make me sit and wonder why,” he is confronting his own addictions. Now in a place of recovery, he is questioning what made him turn to these vices in the first place. Why did the things that were killing him make him feel alive but no longer work? In an interview, he described addiction as having a hole in your life that you fill up with things in order to ignore the actual issues.

“Searching for Captain Save a Hoe” features legendary Bay Area rapper E.40, who speaks to the ways that we build walls to hide our emotions, and how men often turn to promiscuous behavior instead of confronting commitment issues. “Captain Save a Hoe” is a phrase that refers to a man saving a woman from her own destructive behavior. However, Negrito frames the song in a way that suggests men should hold other men accountable instead of praising one another for toxic behaviors. He is also encouraging men to have real conversations with each other about their emotions in order to work towards healthier relationships and to encourage overall mental health.

“These are My Friends” describes Negrito’s friendships with people who have both good and bad traits, but no matter what they have done or how they identify, he will not turn his back on them. This impactful song speaks to the ways people engage in behaviors that inflict harm on themselves and others, whether intentional or not. These actions are not due to them being inherently evil, but often result from enduring a trauma or other complicated social mechanisms that force people into a lifestyle of toxic habits. These people don’t deserve to be thrown, but it takes a community to galvanize around one another with love, empathy and compassion in order for healing to take place. This does not remove personal responsibility from the individual nor does it justify their reactions, but Negrito encourages us to reflect on our own complicated lives before judging someone. We need each other!

Fantastic Negrito described the message of his album in a press release: “What do I want to say to these people, and to the world? If I had the chance, I would tell them the pain they are feeling, the darkness they are going through is temporary—especially if you consider the span of a human life. I would tell them we can’t fight these obstacles alone. We need each other. Get offline. Talk to people. I would tell them I am here for you. We can’t hide from the pain. We need to look right at it. To really look into someone’s eyes is to feel their power and their vulnerability, to feel humanity, and to feel love.”

While there are certainly many current reasons for us to question our sanity and experience loneliness and isolation, Have You Lost Your Mind Yet? is Fantastic Negrito’s attempt to pull us back from the abyss.