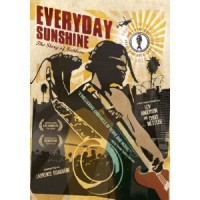 After two years on the film festival circuit, Everyday Sunshine: The Story of Fishbone has now been released on home video. Narrated by Laurence Fishburne but told mostly through the eyes of the members of Fishbone themselves, the documentary details the history of the influential L.A. alternative rock band, from its beginnings during their junior high years to their current troubles and the cautious optimism of Fishbone today. Needless to say, there’s a lot of material covered in just 107 minutes. However, Everyday Sunshine makes a good effort at satisfying lifelong fans as well as newcomers such as myself.

Much of the first section of the film is spent setting up how Fishbone came to be: meeting in junior high, the effect of racism in L.A. and the segregation of black neighborhoods, and the grab bag assortment of genres that influenced the band. Fishbone was a rarity in the music scene, for although they were closely tied to punk, playing shows with Dead Kennedys and The Circle Jerks, they also performed with the Red Hot Chili Peppers and cited the Specials, Parliament and Rush as major musical influences. The documentary does a good job of highlighting these key facts, and does so in a creative, artistic way by chronicling Fishbone’s teenage creation using a Fat Albert-esque animation style before moving into a 1980s pop-out array of pictures. The beginning really fascinated me, not only through the story of Fishbone’s formation, but also the creative artwork that went along with the tale.

What is especially interesting and well-articulated are the racial issues and discrimination that Fishbone had to deal with as black rock musicians defying music industry stereotypes. On the one hand, they weren’t fully accepted into the punk scene since they also drew from second-wave ska and funk. But on the other hand, Fishbone also experienced conflict with black audiences since they didn’t fit the mold of the R&B and hip hop scenes that dominated black popular music. For example, when the band was trying to secure a record deal with Columbia, their demo was first sent over to the black music division before being rejected as “too rock.” Race related topics in Fishbone’s lyrics are also given time. Although earlier songs frequently expressed optimism, in Fishbone’s more “mature” period the band often chose to deal with these racial issues through their music. For example, the lyricism of their songs in the late ‘80s and early ‘90s often reflected the continuous mistreatment of blacks by LAPD officers, when tempers boiled over during the Rodney King trials, later erupting into riots.

During the final section of the film, both the documentary and the band start to go downhill—most notably, guitarist Kendall Jones’ spiral into insanity and departure from Fishbone, his religious awakening, and the eventual lawsuit against bassist John Norwood Fisher for attempting to “kidnap” Jones in order to get him help at a psychiatric ward. Although acquitted, there is nonetheless a split in the band as other members depart, leaving only Fisher and vocalist/ saxophonist Angelo Moore (aka Dr. Madd Vibe) as the two original members. Around this time the documentary segues into the present, as Fisher and Moore try to make ends meet with a band that isn’t drawing as many fans as it used to, and they experience problems with an independent record label that suffers from poor promotion and then loses its distributor. The last ten minutes of optimism in the documentary would have been a good way to end the film at this point. Instead, it cuts back to the racial issues of the early ‘90s and then meanders on about the increasing tensions between Fisher and Moore after 20 years on the road. As the documentary finally comes to a close, Kendall Jones and other band members briefly reunite, past grievances are (almost) forgotten, and the reformation of Fishbone with its original members seems a possibility.

In all, Everyday Sunshine does a great job of providing a behind-the-scenes look at Fishbone, and it’s a story that definitely deserves to be told. Although perhaps a bit too long for those just learning about the group, for lifelong fans there are plenty of poignant moments in addition to concert footage, interviews, and other bonus features beyond just the music that provide new insights into this influential and groundbreaking band.

Editor’s note: those interested in the history and struggles of black rock musicians should check out Raymond Gayle’s documentary Electric Purgatory: The Fate of the Black Rocker (2008), which also features Angelo Moore.