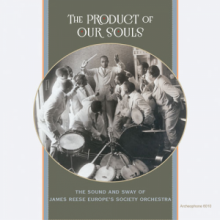 This extraordinary new set from Archeophone Records, The Product of Our Souls, compiles for the first time in history the eight sides recorded by Europe’s Society Orchestra for the Victor Talking Machine Company. Dating from December 1913 to February 1914, these sides represent the earliest mainstream recordings of an African American dance band. In addition, there are twelve tracks featuring recordings of James Reese Europe’s compositions performed by other ensembles of the era, allowing a comparison of performance practices, including differences in arrangements and instrumentation. The compilation is an audio companion to David Gilbert’s excellent socio-cultural history, The Product of Our Souls: Ragtime, Race, and the Birth of the Manhattan Musical Marketplace (University of North Carolina Press, 2015).

James Reese Europe is more widely known for his famed Clef Club, the city’s first labor union for African American musicians, which supplied highly skilled dance bands to white elites in New York and beyond. Europe’s Clef Club Orchestra, with over 100 members, also broke racial barriers in Manhattan’s performance spaces, including Carnegie Hall. The recordings on this set, however, feature Europe’s Society Orchestra (ESO)—another revolving group of black musicians—reduced to about a dozen for these Victor sessions.

After James Reese Europe was appointed exclusive music director for social dance pioneers Vernon and Irene Castle, the ESO accompanied their performances. The orchestra’s syncopated rhythms were incorporated into the Castle’s movements, popularizing new dance forms such as the one-step. Hence the reason three of the eight ESO tracks on this set bear titles associated with the Castles and were composed by Europe, or co-written with Ford T. Dabney. The ensemble selected for this session includes flute, clarinet, cornet, baritone horn, violins, cello, piano and drums.  “The Castles in Europe (Castle House Rag)” is considered Europe’s most influential recording and was added to the Library of Congress National Recording Registry in 2004. The song is a fusion of ragtime and march styles, while also creatively inserting bluesy modulations between major and minor keys.  The Castle’s signature one-step, “Castle Walk,” is notable for the improvised, highly embellished violin solo—a rare feature on recordings in the pre-jazz era—as well as Buddy Gilmore’s percussive effects. The mid-tempo “Castle’s Lame Duck (aka Congratulations Waltz)” has a prominent flute part, while “You’re Here and I’m Here,” an instrumental arrangement of a Jerome Kern-penned Broadway show tune, once again showcases Gilmore’s extraordinary talents.

The initial four tracks recorded in 1913, however, were not composed by Europe and were likely selected by Victor to capitalize on the social dance craze. The lively “Too Much Mustard” features multiple banjo mandolins against a violin and virtuosic clarinet, with Buddy Gilmore adding the groove on an early trap drum-kit. Clarinetist Wilbur Sweatman’s swinging “Down Home Rag” takes the group one step closer to jazz, with the new transfer of the disc revealing background vocals in a bluesy shout style. The other two ESO tracks include the Brazilian maxixe “Amapa,” and the Argentinean tango “El Irresistible,” popularized by the Castles, among others.

The remaining 14 tracks on the set date from 1908-1916 and include other performances of the above ESO repertoire by the Indestructible Band, Prince’s Band, the National Promenade Band, the Van Eps Trio. As one might imagine, these lively but somewhat rigid band renditions are a far cry from Europe’s improvisational pre-jazz style. Also included are five recordings of Europe’s compositions rendered by the popular singers Ada Jones, Bob Roberts, Kathleen Kingston and Billy Murray, as well as the Victor Military Band and Metropolitan Military Band.

Sourced from discs and cylinders in private collections, some of these recordings are relatively rare, and the transfers and digital restoration were done by experts in the field. The extensive 56-page booklet includes an essay and notes on each track by David Gilbert (complete with end notes), historic photographs from archival collections in the U.S. and London, and discographic information. Produced by Archeophone owners Richard Martin and Meagan Hennessey, The Product of Our Souls is an authoritative compilation that emphasizes the importance of James Reese Europe as an extraordinary musician, composer, and bandleader who paved the way from ragtime to jazz.