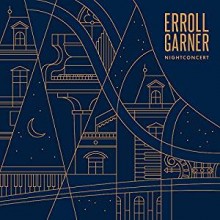 Although it has been just over 40 years since his death, legendary jazz pianist Erroll Garner’s music vibrantly lives on thanks to the record labels who have championed his work. First, Sony Legacy released The Complete Concert By The Sea in 2015 as well as Ready Take One the following year, both of which received major award consideration. Now the people behind Mack Avenue Records have continued efforts to keep Garner’s memory alive with their new release,

Nightconcert. The title is drawn from Garner’s midnight concert in November 1964 at The Royal Concertgebouw in Amsterdam, captured live with an audience of 2000 highly enthusiastic and enraptured people of all ages. This concert recording displays Garner at the height of his career, with eight unique arrangements of classic standards as well as a newly discovered original!

Erroll Garner, was born June 25th, 1923 in Pittsburgh, Pennsylvania. He may be best remembered for his composition, “Misty,” which has become a treasured classic for jazz lovers and standard repertoire for every jazz musician to this very day. Beginning his study of the piano at age three, Garner took lessons from a family friend but he was primarily self-taught and remained an “ear-player” his entire life, never learning to read music. By age 11 his career was well on its way as he played piano on Allegheny riverboats and at 14 he began playing with well-known saxophonist Leroy Brown. Garner went on to enjoy a successful career working with other greats like bassist Slam Stewart and bebop saxophonist Charlie Parker on the “Cool Blues” sessions. He also made regular appearances on The Tonight Show with Johnny Carson.

Nightconcert is an instant classic piano trio album as Garner displays his incomparable style and virtuosity. Opening with the Rogers and Hart classic “Where or When,” Garner chooses to begin this and many other songs with elaborate piano introductions, often with the intent of throwing off the audience so they don’t know what song is coming. He seems to have a tendency to play a hemiola in these intros by maintaining a triple meter in the left hand while playing in a duple meter in the right. He makes this especially prevalent later in the album with the song “Night and Day” as he carries this idea from the introduction throughout the rest of the tune. This is indicative of Garner’s overall style—his right hand typically lays back behind the beat as his left hand drives steadily along—often used as a powerful function to begin and end his slick phrases. As the concert continues, Garner jumps between his up-tempo tunes and lush ballads such as “My Funny Valentine” and “Over The Rainbow,” where he enraptures listeners with his thick and unique chord voicing.

Garner’s playing is unlike any others and simply hearing his live performance on Nightconcert is a truly unique experience—from his iconic groans that can be heard on every record, to his astounding skill and mastery over the piano. Great thanks must be extended to those at Mack Avenue Records for releasing yet another historical recording that keeps Garner’s body of work alive for a new generation.