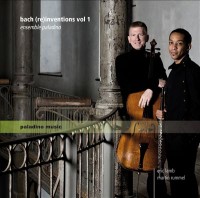 Ensemble Paladino is a collective of European musicians based at the ORF RadioKulturhaus in Vienna, whose mission is “to present uncompromising, diverse and fearless chamber music on the highest level.” Two founding members are represented on this recording: flutist Eric Lamb and cellist Martin Rummel.

By way of introduction, Eric Lamb (b.1978) is a native of Detroit who studied at the Oberlin Conservatory of Music, then departed for Europe for further studies at the Hochschule für Musik Frankfurt am Main and the Sculoa di Musica di Fiesole, Italy.  A specialist in 21st century music, Lamb has performed as a member of the New York/Chicago based International Contemporary Ensemble (ICE) since 2008 (learn more about ICE and Lamb in this interview by Flutronix). Austrian cellist Martin Rummel (b.1974) has gained international recognition for his performances of Bach’s solo suites, as well as his recordings of all the major cello etudes and the world premiere recordings of the cello concertos of Andrea Zani (1696-1757), to name just a few of his notable projects. Rummel is also the owner of the record label/publishing wing of Paladino, the president of the Vienna Music Group, and in his spare time hosts a monthly radio show and writes crime novels.

Bach (Re)inventions vol. 1 is cited as the ensemble’s “first collaborative adaptation project of musical examples from Bach’s keyboard works, in this case his two part counterpoint arranged for flute and cello.” Included in this exploration are the 15 inventions (BWV 772-786), in additional to movements from a partita and the English and French suites, as well as excerpts from the Notenbüchen für Magdalena Bach and Well-Tempered Clavier (all well-documented in the liner notes). Of course this idea is not novel,—Bach’s Inventions have been arranged for any combination of instruments—but Lamb and Rummel have now extended the flute and cello repertoire on these 31 tracks, while taking care to “(re)organize” their sequence “from a less logical [i.e., key/BMV ordered approach] to a more emotional order of short musical works.”

For this project it was necessary for Lamb to step aside from contemporary music, though these Bach (re)inventions must appeal to his entrepreneurial spirit.  He has certainly performed his share of the standard repertoire, and handles the Baroque stylings with ease, achieving a warm, round tone on his flute (Lamb is an advocate of wooden flutes and uses head joints crafted by S. Kotel). Rummel, as one might expect, is truly in his element here, providing a solid, melodious foundation.  Overall, the performance is fairly restrained and straight forward, with a well-matched articulation and timbre from Lamb and Rummel.