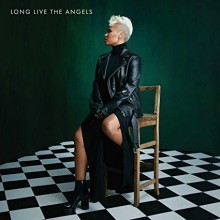 Emeli Sandé’s second full length album, Long Live the Angels, comes four years after her 2012 debut, Our Version of Events.  The Scottish singer-songwriter goes further on this album than she did on her first, with a heavier gospel music influence, more penetrating songwriting, and a voice that is equal parts desperation and determination, the voice of someone who has been through something.

“Breathing Underwater” is quite possibly the best song on the album. From the intimacy of the songwriting (“I believe in miracles ‘cause it’s a miracle I’m here”) to the swelling of the choir in the final chorus, the song is an anthem about making it through the impossible.  Other such anthems on the album include “Sweet Architect” and “Every Piece of Me.”  For as many anthems as there are, though, this is a very intimate album with production that allows Sandé’s voice to shine through rather than be overpowered.

There are few features on the album, but they carry a lot of weight: the elusive Jay Electronica offers a verse detailing his journey through love (“Love is like a garden, love is like a death sentence Love is like a pardon, I’m free again and ready”). On “Tenderly,” Sandé is joined by her father, Joel Sandé, and The Serenje Choir.

The album is over an hour long, but doesn’t overstay its welcome. Sandé is a poet, detailing her heartbreak over the last four years, but ultimately emerging triumphant.