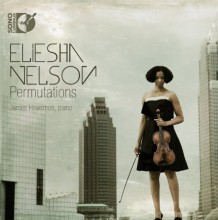 Cleveland Orchestra violist Eliesha Nelson has established herself as a formidable interpreter of American music and champion of her instrument. She is also proof that a child raised in remote North Pole, Alaska can achieve her dreams through hard work and dedication. At the age of twelve she was sent to the Indiana University String Academy, and later was accepted into the Cleveland Orchestra Youth Orchestra. After matriculating from the Cleveland Institute of Music, she received an artist diploma from the Royal Academy of Music in London and was offered the position of acting principal viola with the Florida Philharmonic. But the girl from Alaska, unaccustomed to Florida’s heat and humidity, gladly returned to northern Ohio in 2000 when offered a position with the Cleveland Orchestra.

Nelson’s first album, Quincy Porter: The Complete Viola Works, received four Grammy nominations and won a Grammy for Best Engineered Album, Classical in 2010. Her new CD, also released by Sono Luminus, is just as likely to garner awards, for both Nelson’s performance and the sonic excellence of the recording.

Nelson opens with the “Sonata for Viola and Piano, Op. 69” by Russian composer Nikolai Kapustin (b. 1937). Selected for its incorporation of jazz elements, the sonata is reminiscent of early 20th century compositions by Gershwin, though only occasionally offers short passages that really swing—primarily in the third movement. “Two Pieces for Solo Viola” by Washington, D.C.-based composer John McLaughlin Williams, is a showpiece in the style Fritz Kreisler. Like Kriesler, Williams is also a gifted concert violinist, and on this work sought to “bring out the burnished tone of the viola.” The introspective Sarabande leads into a Toccata, performed at breakneck speed by Nelson, but with great sensitivity.

Permutations takes its title from the second movement of Ross Lee Finney’s “Second Sonata for Viola and Piano” (1953; rev. 1955). Though based on a 12-tone scale, the sonata doesn’t strictly adhere to serialism, and in fact is extremely melodic. In a similar vein, Mumford’s “Wending,” employs harmonic material based on letters of Wendy Richman’s name, for whom the work was written.  This solo viola work is rhapsodic in nature, with somewhat improvisatory sections gradually fading into the ether.

The album concludes with the two movement “Sonata for Viola and Piano” (1989) by composer and concert pianist George Walker. After a lyrical but highly chromatic first movement, the work leads Nelson through a series of difficult triple stops in the middle section, then closes softly with a coda that quotes the French Renaissance song, “L’Homme Arme.”

Nelson proves she is more than capable of flawlessly executing these technically challenging works, while bringing to light many gems that expand the viola repertoire.

Audiophiles will appreciate the 2-disc set, which includes a Pure Audio Blu-ray disc with high resolution surround sound and stereo versions of the tracks, as well as a standard CD. If your Blu-ray player is connected to your computer, you can also use the mShuttle application allowing access to MP3, FLAC and WAV files.