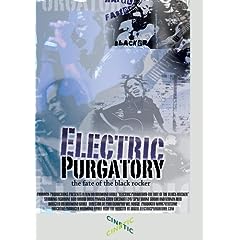 Black musicians have held a very peculiar position in rock ‘n’ roll music even though the genre is rooted in the African American musical continuum. Outside of the grand successes of Jimi Hendrix, Little Richard and a few others, black rock-n-rollers have been categorically marginalized in a genre that their culture helped create. Raymond Gayle’s Electric Purgatory: The Fate of the Black Rocker (2008) details the historic struggles of black rock musicians as they navigate the intersections of music, industry, and race. Part history and part conversation, Electric Purgatory includes commentary from a number of notable black musicians including Angelo Moore of Fishbone, Doug Pinnick of Kings X, and Cody Chesnutt.

The film’s first half is a history of African American participation in rock ‘n’ roll. Featuring archival footage and supporting commentary, this section explores the ways in which artists such as Little Richard, Jimi Hendrix, Rick James and others have occupied both foundational and marginal spaces within rock music. Particularly intriguing were the discussions of Little Richard’s influence and Spacey T’s (Fishbone) comments about late P-Funk guitarist Eddie Hazel, who is often left out of the pantheon of guitar heroes. The second half focuses on the relationship between black rock musicians and a music industry that has often limited their opportunities for advancement. The almost heartbreaking sentiments from Angelo Moore within this section are by far the film’s most captivating moments.

The only complaints one could make about this film is that a lacks background information on featured artists and there is not enough discussion of the reception of black rock by black audiences. Outside of those minor issues, Electric Purgatory covers a lot of ground in roughly seventy minutes. Gayle does an excellent job of balancing the rich history of black rock music with discussion of the issues that have plagued it since the beginning. Therefore, the film never seems overly romantic or too dispirited. If one is looking for a thorough examination of what it means to be a black rock musician, Electric Purgatory: The Fate of the Black Rocker is definitely the way to go.