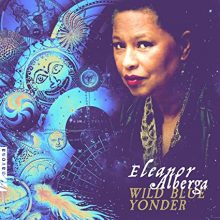 In unsettling times, Eleanor Alberga’s new release of contemporary chamber music feels like an aesthetic introduction to the new normal of discomfort, anxiety, and fleeting moments of absolute beauty. Although the pieces on the album were composed and recorded over a twenty year period by the Jamaican-born British composer and pianist, they are held together by a common theme of dreams and exploring the unknown. These dreams are not necessarily comforting, but rather an exciting journey through dream logic, full of slow fades, abrupt changes, and constant transformations of small motives and traditional harmonies that leave you feeling as if you are discovering a new territory, but with vaguely familiar landmarks.

The album opens with No-Man’s-Land-Lullaby (1997), for violin (Thomas Bowe) and piano (Alberga), which was inspired by the trench-warfare of World War I while Alberga was visiting central Europe and experiencing beauty amidst the wreckage of two devastating wars. The piece begins with soft, spectral piano chiming, an open sky of stars over a vast horizon, with the violin lyrical and singing, interrupted by eerie and jagged punches in the violin and piano. Calm eventually returns with an Ivesian development of Brahm’s “Lullaby,” played by the violin, softly in the stratosphere, offering a twisted kind of comfort for the perished souls in No Man’s Land.

Shining Gates of Morpheus (2012) for string quartet and hornis inspired by Morpheus, the Greek God of sleep, and a play on the Greek’s idea that true dreams enter through gates of shining horn. This is the most playful piece on the album, featuring Ensemble Arcadiana with terrific horn playing by soloist Richard Watkins, who gets to use all kinds of extended techniques. Here, sleep feels like a refracted version of a classic Hollywood film score, with a sleepy awakening, horn calls to action, and a shimmering romantic scene in the moonlight. However, Alberga makes it all her own with her immense talent for creating stunning instrumental textures and her ambiguous, compelling harmonies.

Succubus Moon (2007) for oboe and string quartet is suffused with an ominous atmosphere, with soloist Nicholas Daniel’s oboe acting as a bending foghorn call in the dark night. After chromatic twists and turns, the strings finally settle on a shocking C major chord, but the oboe won’t conform. Of the sleep metaphors, this one is a nightmare. The title track, Wild Blue Yonder (1995), is the most abstract, but has terrific rhythmic vitality and energy. It eventually exhausts itself, until the violin is meek and drifts off into the celestial ether, only to emerge in the lowest range, reassuring and gathering strength for a new adventure.

The Ensemble Arcadiana is terrific as always and perfectly suited to Alberga’s writing. They are dramatic, precise, and expressive. Thomas Bowes, Alberga’s husband and founder of the Ensemble Arcadiana, plays violin on every track, and his technique is phenomenal, especially in his upper range and when playing hushed. No-Man’s-Land-Lullaby and Wild Blue Yonder were recorded live in concert, which makes the playing even that more impressive. This album is a great follow up to the Ensemble’s album of Alberga’s string quartets from 2019, and this reviewer can’t wait for more.