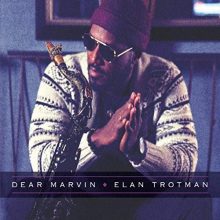 Released in April in celebration of Marvin Gaye’s 80th birthday, Dear Marvin is jazz saxophonist Elan Trotman’s tribute to the legendary soul singer. Reimagining ten tracks from Gaye’s catalogue, this predominantly instrumental album includes a variety of guest artists who compliment Trotman’s smooth sax solos. Opening with “Inner City Blues,” Trotman is assisted by guitarist Sherrod Brown, who holds down the rhythm section throughout the album along with Keithen Foster and Kyle Miles alternating on bass, Mitch Henry on keyboards, and Atticus Cole on percussion. The lead single, “Got to Give it Up,” retains the funky flavor of Gaye’s original version, while Ray Green covers the vocals on “Mercy Mercy Me.” Trumpet player Patches Stewart is featured on “Distant Lover,” with Jeff Lorber taking over the keys on “Trouble Man” and Najee adding a flute solo to “After the Dance.” Ushered in on a bed of sensuous strings and snappy horns, “I Want You” receives an update courtesy of a brief appearance by rapper Obadele Thompson, and trombonist Jeff Bradshaw alternates funky solos with Trotman on the satisfying closing track, “I Heard It Through the Grapevine.”