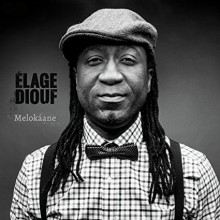 Label: Pump on the World

Senegalese-born, Canada-based artist Élage Diouf released his sophomore album Melokáane in September on Pump on the World. “Melokáane” means “the reflection of a life’s journey” in Wolof (a Senegalese language), and the album explores themes of immigration, spirituality, and political resistance that have been present throughout Diouf’s life and work.

A mix of rock, soul, and folk, Melokáane starts out by paying tribute to one of the most famous resistance leaders in recent history: Nelson Mandela. “Mandela” (heard in the video below) is interspersed with actual clips of Mandela speaking and honors his courage and determination through uplifting, upbeat music and lyrics. Another standout track is “Sankara,” which features Diouf’s impeccable percussion skills and relaxed rhythms that sound like very peaceful reggaeton. The album’s liner notes say the song is a tribute to Thomas Sankara and Patrice Lubumba, two “emblematic figures of the struggle to free Africa from major Western powers,” noting that their mysterious deaths still remain unexplained.

The album was co-produced by Diouf himself and Alain Bergé, and also includes collaborations such as with multiplatinum singer Johnny Reid  on “Just One Day” and guitarist Jordan Officer on “Tay.” The album is entirely in Wolof, and is a beautiful musical representation of Diouf and his many inspirations and influences, both political and personal.