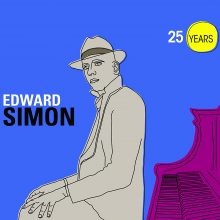 In celebration of a quarter century of inventive and trailblazing music, Venezuelan-born pianist, composer and bandleader Edward Simon has released two-disc career retrospective 25 Years. This project is a collection that celebrates his 50th birthday, featuring tracks from thirteen of Simon’s albums that span from 1995-2018. Featuring collaborations with members of the SFJAZZ Collective and other brilliant musicians such as tenor saxophonist Mark Turner, altoist David Binney, bassists Scott Colley, John Patitucci and Ben Street, drummers Brian Blade and Adam Cruz, and vocalists Luciana Souza, Lucia Polito, Genevieve Artadi, and Gretchen Parlato, this is a self-curated album that uses jazz to reflect the variety of musical styles that Simon has grown comfortable with over his career, from Latin American folk and popular idioms to Afro-Latin rhythms and European classical forms.

25 Years features seventeen selections of creatively vivid music, with two broader themes separated between two discs. As the press release states, “the first disc showcases the matrix of relationships that feed and define Simon’s music, the second concentrates more on his work as an arranger and orchestrator.” The collection begins with “Ericka,” a warm and flowing track that showcasing bright piano lines and smooth sax melodies. The aptly named “Navigator” also puts the spotlight on the piano, but is delivered with much more complexity and physicality, propelled by the swinging groove from drummer Eric Harland. Some creative mixtures of horn and sax alongside expanded instrumentations can be seen in tracks such as “Venezuela unida” and “Uninvited Thoughts,” featuring Imani Winds and the Afinidad Quartet, while tracks like “Triumphs” showcase a minimalistic approach, featuring vocalist Gretchen Parlato gently singing over a sparse percussive rhythm. Simon’s versatility, ingenuity, and pianistic ability are clearly seen in this project, reflecting his many years of experimentation and exploration within the art form of music.

25 Years is an easy recommendation for jazz and classical music lovers, featuring selections that illustrate styles and cultures merging in unique and beautiful ways. This album is one that demands several repeats, and I’m speaking from experience.