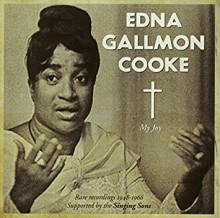 Though her name may not be quite as familiar to contemporary gospel music fans, Edna Gallmon Cooke ranks right up there with Mahalia Jackson, the Caravans, the Roberta Martin Singers, and the Famous Ward Singers in the pantheon of great gospel artists. Her untimely death in 1967 cut short her recording career, and accounts for her underappreciation when compared to her contemporaries. On My Joy, producer and gospel historian Per Notini has gathered together Cooke’s rarest recordings over the two decades of her career, attempting to fill the gaps left by two previous compilations of her works. This is a rare gift indeed, for which all gospel music fans can be grateful!

Cooke, who was born in 1918 in Columbia, South Carolina, was raised in her father’s church. The family relocated to Washington, D.C. where her father founded the Springfield Baptist Church, where Edna served as choir director before attending Temple University in Philadelphia. Her ambitions to sing secular music took a 180 degree turn after witnessing a performance by Willie Mae Ford Smith, and from this point forward she devoted herself to gospel music.

The compilation begins with Cooke’s first five recorded performances from 1948-49, which reveal her sweet and supple soprano characterized by a very fast, shallow vibrato. Included is her first single to get considerable airplay, “Angels, Angels, Angels” (composed by Indianapolis gospel artist Beatrice Brown), accompanied by the Mt. Vernon Men’s Choir of Washington, D.C. Cooke’s popularity was already rising when she was picked up by Essex Records for her next pair of singles. “Have You Got Room?” (circa 1950-51), accompanied by the Young People’s Choir of her father’s church, shows a powerful transformation in her vocal style. The sweet soprano is now capable of raising the rafters!

From this point forward, there are simply too many outstanding tracks to mention. “Walk Through the Valley” (1952) demonstrates Cooke’s trademark chanted sermonettes, while “(Talk About a Child that Do Love Jesus) Here Is One” is a solo tour de force showcasing Cooke’s masterful use of the melisma. The Roberta Martin-Theodore Frye song “Hallelujah (Jesus Love Bubbles Over)” features the Singing Sons, Cooke’s regular backing group who provided accompaniment on many of her Nashboro sides. The set concludes with Thomas Dorsey’s “Remember Me,” recorded in 1966 as Cooke’s health was failing. Notini inserted this track as a tribute to Cooke, “one of gospel’s greatest singers,” who surely must have known that her time was running out as she sang the final notes of the chorus, “Now when I’m gone, please remember me.”

My Joy was released in a limited pressing on the Swedish label Gospel Friends. Don’t wait too long to pick up a copy for your collection.