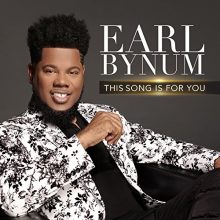 Earl Bynum’s third solo album, This Song Is For You, is full of great choir and congregational songs featuring the many different textures of modern gospel music. Different from his previous album Open My Heart (2009), Bynum decided to step back from the live stage and do a full studio recorded album. Bynum says of the sessions, “It was different for me … I’m a live concert type of performer… it helped take me out of the choir backdrop and let me live in a new space.”

Bynum has been a singer and conductor for a variety of choirs since the 1980s. He is perhaps best known for his work with the Stellar Gospel Award winning and Billboard charting Mount Unity Choir in Chesapeake, VA. Bynum has also written for and directed the Virginia Mass Choir, has served as 1st Vice President to the Virginia Gospel Radio Announcers Guild and for the last few years has also served as worship leader for the Annual Hampton University Minister’s Conference. Bynum has recently signed with Tyscot Records.

This Song Is For You certainty brings a “Brighter Day” to gospel music fans looking for new music to add to their playlist and perform with their local church choirs.