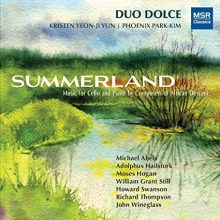 Duo Dolce, featuring cellist Kristen Yeon-Ji Yun and pianist Phoenix Park-Kim, has assembled a satisfying collection of pieces by composers of African descent on their recent release, Summerland. This album is a follow up to Deep River: Music for Violin and Piano by Composers of African Descent, released by Park-Kim and violinist Merwin Siu in 2016. Most of the pieces chosen for Summerland reflect the lyrical side of classical music, with winding, twisting harmonies and long, sustained melodies.

An alumna of the IU Jacobs School of Music who studied with Janos Starker, Kristen Yeon-Ji Yun’s specialty is her lyric ability, and her beautiful playing easily brings out the singing line in both the upper and lower registers of the cello. She soars on Moses Hogan’s four arrangements of spirituals as well as the piano and cello transcriptions of two works, including the title track “Summerland,” by William Grant Still. The standout track is the performance of Adolphus Hailstork’s Theme and Variations on Draw the Sacred Circle Closer (2009), which showcases a wider range of techniques for the cello and a surprising set of variations (professionally recorded here for the first time). Yun beautifully navigates the beauty of the original tune and can shape the challenging variations to keep the theme in the background at all times. Howard Swanson’s Suite for Cello and Piano(1951) also provides a burst of contrast from lyricism in its spritely “Pantomime,” plodding “Dirge,” and lively “Processional.”

Phoenix Park-Kim is the perfect partner for Yun’s lyricism, supporting the cello with a similarly lyrical bent, but never overshadowing in their pieces together. Park-Kim’s solo talents are also featured in two selections: the piano preludes by Richard Thompson, and a short suite by John Wineglass. The album closes with a surprise, the love theme from the film Get Out by composer Michael Ables, where every phrase starts lush and full, but drifts off to some place stark and distant.

Summerland showcases the many talents of Yun and Park-Kim, and the tender and expressive side of these varied composers.