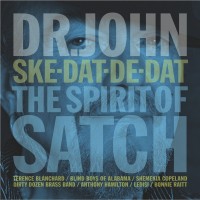 Title: Ske-Dat-De-Dat: The Spirit of Satch

What happens when the spirit of a legendary New Orleans’ jazz trumpet player issues the directive “take my music and do it your way” to one of NOLA’s most beloved living musicians (in a dream, no less)? Such is the premise for Ske-Dat-De-Dat: The Spirit of Satch, Dr. John’s reinterpretation of Louis Armstrong standards, a tour-de-force that runs the gamut of the city’s myriad R&B, blues, jazz and rock ‘n’ roll traditions. Dr. John’s astonishing knowledge of these genres, as well as his trademark vocals and piano, are on display throughout the album, where he’s joined by a stellar line-up of special guests.

Highlights abound on every track. The deeply funky six minute version of “Mack the Knife” features a rap interlude by Mike Ladd bookended by the scatting trumpet of Terence Blanchard, and this is followed by a Latin reading of “Tight Like This” with Arturo Sandoval taking over on trumpet and Cuban rapper Telmary Diaz on vocals. “Dippermouth Blues” introduces James “12” Andrews (aka “Satchmo of the Ghetto” and older brother of Trombone Shorty), who helps to put a Treme twist on this smokin’ rendition of a song first recorded by King Oliver’s Creole Jazz Band (with Armstrong on trumpet). Reigning blues queen Shemekia Copeland makes an appearance on “Sweet Hunk O’Trash,” her sassy voice a perfect foil to the gritty growl of Dr. John as they trade a bit of trash talk.

On the more traditional side, the Dr. John duet with Bonnie Raitt, “I’ve Got the World on a String,” swings on the foundation of the rhythm section featuring Ivan Neville and Bobby Floyd on the B3, Derwin “Big D.” Perkins on guitar, Donald Ramsey on bass, and Herlin Riley on drums. On the historic “Gut Bucket Blues,” one of the earliest fusions of jazz and blues recorded by Armstrong in 1925, Nicolas Payton picks up the trumpet and improvises over a horn section led by trombonist Sarah Morrow, the album’s arranger/bandleader/co-producer. Anthony Hamilton gives a contemporary reading to “Sometimes I Feel Like a Motherless Child” that effortlessly combines elements of jazz with contemporary R&B. Ledisi and The McCrary Sisters take us to church on “Nobody Knows the Trouble I’ve Seen,” which is followed by The Blind Boys of Alabama backing Dr. John on “Wrap Your Troubles in Dreams.” The album concludes with “When You’re Smiling (The Whole World Smiles With You),” the Dirty Dozen Brass Band lending their chops to an arrangement by Brian Quezerque (son of the legendary Wardell Quezergue), nicely wrapping up this cornucopia of Crescent City musicians and traditions.

Ske-Dat-De-Dat receives 5 stars for its remarkably inventive arrangements, stellar back-up band, trumpets galore, and guest vocalists carefully selected to enhance and not detract from Dr. John’s vision. When Satch looked down from the heavens, he definitely chose the right man for the job—and thankfully Dr. John heard the clarion call from on high.