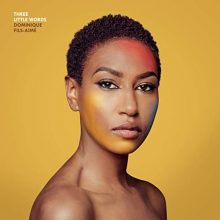 JUNO Award-winning singer-songwriter Dominique Fils-Aimé expresses her eclectic interpretation of soul music in her latest album, Three Little Words. Produced, arranged, and mixed by the acclaimed producer Jacques Roy, this project combines a multitude of sounds, themes, and cultures, creating a album that is both powerful and thought-invoking. The 15 tracks feature heartwarming melodies, inspired lyrics, and beautiful arrangements that provide a window into Fils-Aimé’s soul while also seeking to enrich the soul of the listener. Scheduled to release during Black History Month, the album is the final installment in the artist’s trilogy exploring the roots of African American musical culture.

“While We Wait,” the album’s recent single, is an interesting orchestration of voices and instruments that begin by emulating the sounds of 1950’s doo-wop with a very light and bouncy feel before transitioning into a more heavy and dramatic mood. The song mirrors the “beautiful yet confounding naivety of that era in music and politics that led us where we are today.” As Fils-Aimé explains, the track touches on “the transition between two eras, filled with necessary growing pains. Leaving carelessness behind in order to embrace the mission that belongs to us all.” This duality can be seen throughout the entire album. There are a couple of requisite soulful breakup songs here and there, such as “You Left Me” and “Mind Mad Up.” However, Fils-Aimé addresses freedom and empowerment in tracks like “Grow Mama Grow,” “The Healing Song,” and the album’s first single, “Love Take Over.” Closing with a bluesy arrangement Ben E. King’s “Stand By Me,” Fils-Aimé provides a beautifully subdued resolution to her sobering, yet inspirational, album.

Three Little Words is a neo soul album that seeks to redefine the meaning of ‘soul music’ by featuring songs that do not strictly conscribe to the traditional boundaries of the genre, allowing Fils-Aimé more latitude to express her thoughts and emotions. This project uses divergent themes and musical genres to highlight the divergence in our society today in an effort to spark a larger movement towards societal change and social justice. Three Little Words is a wonderful listen for those seeking intelligent and stimulating music with a message.