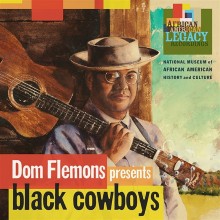 Black cowboys may not be the first thing that comes to mind when the Wild West is mentioned, but they were prevalent and left an undeniable impact on the development of the American West. Following the end of the Civil War in the late 1860s, thousands of newly-freed African Americans moved westward to start new lives. Some chose the grueling and often dangerous path of becoming a cowboy, an occupation in which work ethic mattered more than skin color. These pioneers worked long, hard days alongside Mexican vaqueros, Native Americans, and white cowboys and often turned to song for comfort on the trails.

The newly released Black Cowboys featuring co-founder of the Carolina Chocolate Drops, Dom Flemons (aka “The American Songster”), places these often forgotten pioneers of the Old West in the spotlight. Produced by Flemons and Dan Sheehy for Smithsonian Folkways as part of its African American Legacy series, the album pays tribute to the music, poetry, and complex history of these cowboys. The accompanying 40 page booklet includes essays by Flemons (on the cowboy’s music) and Jim Griffith (on the history of Black cowboys), as well as detailed notes on each track complemented by many archival photographs.

Many of the songs on Black Cowboys are traditional tunes arranged and performed by Flemons, such as “John Henry y los vaqueros,” which highlights instruments with roots in African American minstrel shows like the fiddle and cow “rhythm” bones. Another track arranged by Flemons, “Black Woman,” is a field holler collected in the 1930s that has themes of ranching and leaving behind loved ones. Although it isn’t a traditional cowboy song, the song honors the thousands of African American women who helped develop the West.

Other tracks were newly composed by Flemons to pay homage to notable historical figures. For example, “Steel Pony Blues” is about Deadwood Dick, sometimes called “the greatest Black cowboy in the Old West,” who later became a Pullman porter, while “One Dollar Bill” is a tribute to legendary rodeo rider Bill Pickett who invented the sport of bulldogging. “He’s a Lone Ranger” recalls the life of Bass Reeves, the first African American U.S. Marshall.