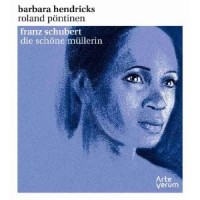 African-American soprano Barbara Hendricks has never been afraid to forge her own path:  from obtaining undergraduate degrees in math and chemistry before obtaining a music degree from Juilliard, to relocating to Europe and obtaining Swedish citizenship, to working as a Goodwill Ambassador for the United Nations High Commissioner for Refugees, she has shown a passion for her broad interests and the conviction to pursue them.  Her performance repertoire spans opera, jazz, and chamber music, and in 2007 she founded her own label, Arte Verum, to record vocal recital repertoire and allow herself (and other artists on the label) more control over their artistic endeavors.

Hendricks’s newest release on Arte Verum reflects her self-directed tendencies.  Accompanied by pianist Roland Pöntinen, Hendricks sings Franz Schubert’s Die schöne Müllerin, D795 (1823), a 20-lied cycle setting poetic texts by Wilhelm Müller.  Though Schubert’s many lieder have been staples of Hendricks’s recital repertoire for decades, this album marks her first recording of a complete song cycle; moreover, Hendricks challenges the vocal tradition in selecting Die schöne Müllerin, a cycle typically sung by male singers.  In her liner notes, Hendricks writes that she was convinced of the emotional universality of the cycle that transcends the need for a male performer: “Schubert painted his harmonies and melodies onto the canvas of the words in such a natural way and I felt that my great task was to match his simplicity.  I wanted to sing them in a way that allowed that perfect marriage of music and text to flow as naturally as speech.”   Her performance here does justice to this goal, her voice conveying warmth, sorrow, excitement, and despair, while Pöntinen’s sensitive playing allows the piano to participate in the narrative and paint emotional landscapes.

The deluxe edition includes substantial liner notes on Schubert and Die schöne Müllerin by Jean-Marc Geidel.  It also includes a bonus DVD containing interviews in French and English with Hendricks and two of her collaborators, pianist Love Derwinger and lighting designer Ulf Englund, discussing their approach to performing Schubert’s Winterreise, D911 (1827), during their 2009 Swedish concert tour.  It also includes live excerpts of Hendricks performing Winterreise, another cycle traditionally performed by male singers (Hendricks is planning to release a recording of the complete Winterreise in 2011.)  While the CD alone offers a fine recording of one of Schubert’s most beloved cycles, the DVD offers tantalizing glimpses of a fuller sensory journey that Hendricks and her collaborators create in live performance, enough to hope, perhaps, for a full-length video release at some point.