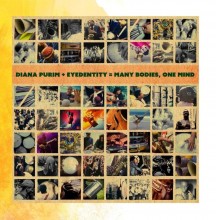 Title: Many Bodies, One Mind

Diana Purim was destined from birth to become an artist, touring with Chick Corea’s Original Return to Forever in the belly of her mother, renowned Brazilian jazz singer Flora Purim. Her interest in other styles of black popular music began when she first saw break dancing and heard hip hop music. Diana was later influenced by artists such as Billie Holiday and Bob Marley. Krishna, Diana’s husband and band leader for their group EyeDentity, is the son of renowned jazz bassist Walter Booker, nephew of Wayne Shorter and godson of Herbie Hancock. Krishna began his musical career beat-boxing for Herbie, and also credits Hancock for introducing him to hip hop and to the idea for chart topping track “Rockit,” featuring Grand Mixer D.ST.  Eyedentity has also had the privilege of working alongside many other talented artists including Sergio Mendes, Flora Purim, Wah Wah Watson, Babatunji Olatunji, Alphonso Johnson, The Grateful Dead, and recently with Preservation Hall Jazz Band.

Many Bodies, One Mind is an album based on the Buddhist concept which signifies a unity that has at its heart, respect for the diverse and unique qualities of each individual. This unity can be formed only among those who respect one another and cherish each other’s unique attributes and abilities, while working in harmony to compensate for one another’s weaknesses. In essence, many people having the same feeling, thought or aim toward a goal.

Musically the album is infused with an eclectic selection of sounds and musical concepts pulling from, but not limited to Brazilian jazz and psychedelic trip hop. Some of those who contributed musically to the album including Airto Moreira, who appears on the song “Batucada;” Herbie Hancock on the piano solo on “Acordi;” George Duke who guests on “Questions;” Justo Almario who performs tenor sax and flute on “Tombo in 7/4;” and Pete Lockett who adds tablas/Indian percussions on “Você Não Me Engana.”

The essence of the album is embodied in the title track “Many in Body,” a song that is governed by the Buddhist proverb for which it is named. However, during an interview, Krishna and Diana commented that the root song can be traced back to slavery. Krishna says that while slavery was different in South America, where religious and musical freedom was not as heavily governed as it was in America, there are many similarities in the things that were both retained and created musically and culturally in both spaces. While there were many body’s scattered throughout the diaspora, there was still a need for certain types of expression. Not a monolithic expression, but an expression governed by some of the same ideas and principles. Many bodies, one mind.