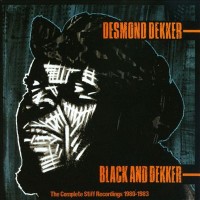 The career of Jamaican musician Desmond Dekker is closely connected with the United Kingdom. Dekker was one of the earliest reggae musicians to make a huge splash outside of Jamaica, with hits like “Israelites” and “007 (Shanty Town)” beloved by skinheads and the larger pop culture alike in the late 1960s.A ska revival in the late 1970s—led by assorted 2 Tone acts such as The Specials and Madness—catapulted Dekker and his contemporaries back into the spotlight. While mainly specializing in Post-Punk and New Wave acts, Stiff Records looked to capitalize on the renewed interest in ska and quickly signed Dekker in the early 1980s to a contract that resulted in two full albums and a host of singles. Unfortunately, the releases didn’t catch on and quickly faded into obscurity, as low sales brought Desmond Dekker’s brief time with Stiff to an end. But such music can’t stay lost forever. Pressure Drop has for the first time on CD released Dekker’s complete works on the Stiff Records label, providing an accessible and concise look into another era of the famous musician’s career.

Dekker’s first full album release through Stiff, Black and Dekker, reworked several of his early hits into a style more suitable for the 2 Tone ska revival. Generally, this meant a more rock-flavored tinge and a “busier” sound. For example, the original 1968 and updated 1980 versions of “Israelites” have several key differences. While the original was laidback and reserved, with the band keeping a steady rhythm throughout, the updated rendition has drums opting for a driving beat through the hi-hat and snare, as guitar is replaced by vocals imitating the instrument. In a clear attempt at connecting with huge acts like The Specials and Madness, there’s a saxophone solo in the middle that further stresses a more rock-oriented sound. The same holds true for older hits such as “007,” “Many Rivers to Cross,” “Rude Boy Train” and “Lickin’ Stick,” as well as new compositions. Though the album went largely unnoticed, hardly making a dent in the UK charts and only reaching the Top Ten in Belgium, sales were strong enough to warrant a second album, 1981’s Compass Point.

On Compass Point, Dekker sought a change from the 2 Tone sound, adopting differing contemporary styles. His decision to record in the Bahamas, away from the influences of the UK scene, facilitated this change in direction. While the majority of the album is rooted in  reggae, there are allusions to American rock and R&B. “Cindy” is the epitome of every ‘80s rock song, while “That’s My Woman” is the same idea, only this time it has an electrified, funky R&B edge. The most interesting and strongest track is the dubbed-out “We Can and Shall.” If I hadn’t know any better, I would have thought the song was produced by the great Adrian Sherwood—the heavy emphasis on incorporating African rhythms and sounds, along with tinges of Lee “Scratch” Perry through the use of roaring lions and tweeting birds is absolutely crazy in the best of ways. While the rest of the album is overall a very accessible collection of songs, “We Can and Shall” is a quick flash of odd brilliance that’s gone as quick as it started. Regardless, Compass Point was unable to garner any major attention, and Dekker was subsequently dropped from the label soon after.

It’s a shame that Dekker’s four-year stint went largely unnoticed by the general public at the time. After Stiff Records was unable to produce profitable releases, Dekker declared bankruptcy in 1984. Keeping himself afloat solely through live performances for the rest of the decade, Dekker released only one album, a live performance, during that period. Dekker’s luck would change, however, in 1990 when a Maxell TV advert used his song “Israelites,” catapulting him back on the scene. Working with the Specials in 1996, Dekker continued to perform, introducing a new audience to his music. While leaving this world too early in 2006, Desmond Dekker nonetheless continues to be appreciated for his musical talents and amazing voice. Black and Dekker: The Complete Stiff Recordings 1980 – 1983 is a wonderful addition to Dekker’s catalog, showcasing an interesting reinterpretation of assorted hits and original creations reworked for a 2-Tone generation.