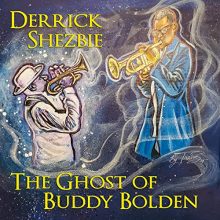 Featuring tunes that would have been typically played on a Buddy Bolden concert in the early 20th century, the album opens with exciting up tempo renditions of  “Makin Runs,” “Didn’t He Ramble,” “Ride on King Jesus,” Down by the Riverside,” and “Hot Time.” The tracks are imbued with an energetic dancing spirit, and feature room for all the soloists to improvise. On “Hot Time,” Shezbie shines with a high-energy trumpet solo that uses variations of one note with different rhythms over multiple choruses. The second half of the album settles into slower grooves, beginning with the bluesy “Pallet on Your Floor.” Following are traditional songs that that were associated with the earliest performances of Bolden’s band, including “Careless Love” and “Bucket’s Got a Hole in It.” The final tune, “Funky Butt,” is one of Bolden’s most popular songs, and would have been played to a crowded floor of people dancing close together.

Derrick Shezbie gives a fitting tribute to the spirit and music of one of the most legendary and enigmatic figures in New Orleans jazz on The Ghost of Buddy Bolden, while bringing new life and vigor to the music.