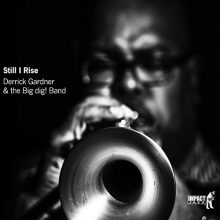 The majority of the tracks on the album reference Black artists and cultural icons. For example, the uplifting title track, “Still I Rise,” was inspired by Maya Angelou’s empowering poem. Derrick conceived the work shortly after Angelou’s death in 2014, “as if her spirit sang this melody to me,” and the poem’s message about overcoming prejudice and injustice certainly rings true in these troubled times. “Melody for Trayvon,” of course, is dedicated to Florida teenager Trayvon Martin who was murdered by a vigilante in 2012. The mournful track encompasses all of the “sadness, solemnity, and anger” related to gun violence and the untimely deaths that sparked the Black Lives Matter movement. Derrick explains, “As a composer and a student of human history, I see my music as a kind of activism… I want to create an empathic response that will move us toward eliminating this kind of sanctioned brutality.”

The uptempo “Blues à la Burgess” is dedicated to another family member, Derrick’s father Burgess Gardner, an accomplished jazz trumpeter who he claims “is one of the bluesiest musicians I’ve ever heard.” The rambunctious track is a showcase for Derrick, who demonstrates his virtuosity on the instrument he learned at his father’s knee. Another highlight is “Push Come da Shove,” a complex arrangement that showcases the trombone section. Derrick based some of his melodic and rhythmic phrases on the left hand riffs of pianist McCoy Tyner performing Coltrane’s “Resolution” on the classic album A Love Supreme.

Those who purchase the album should be aware that the physical CD contains seven tracks, while the digital version of the album includes three additional works: the jazz waltz “To Whom It May Concern,” the slow bossa nova “One Thing Led To Another,” and the sultry and bluesy “DAAAYUUUM,” which should not be missed.

Derrick Gardner proves himself to be a master composer and jazz trumpeter on Still I Rise, offering extremely complex and inventive arrangements that can be appreciated at many levels, while the incredible musicianship of the Big dig! Band is the icing on the cake.