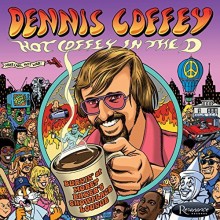 If you listen to classic Motown soul, you have heard guitarist Dennis Coffey, a bona fide member of the famous Funk Brothers in-house studio band. That fuzzy funky guitar on the Temptations “Cloud Nine,” that’s him. Also the neat little psychedelic hooks on later Diana Ross and the Supremes hits, and you can hear him on songs by Edwin Starr and Freda Payne. But wait, there’s more: he also had a million-selling instrumental hit in the ’70’s, “Scorpio.”

Like most other Detroit musicians of his era, Coffey’s recorded work is only part of his legacy. He was a regular in the city’s then-thriving music club scene. By 1968, Coffey was a member of a jazz/funk trio led by organist Lyman Woodard. The group regularly played at Morey Baker’s Showplace Lounge, known around town as a club where the audience expected excellent music, and respected the musicians by listening rather than partying and dancing.

These recordings were funded by Coffey and his production-company partner, but not released until now. They are not haphazard tapings, or soundboard feeds, but rather professional recordings of a working band in action. Here’s the promo video for Hot Coffey In the D, which is more of a mini-documentary on the making of this album:

For the most part, Coffey, Woodard and drummer Melvin Davis smoke up the joint. Some tunes run a little long (especially their cover of “The Look of Love,” which just doesn’t have enough meat on the bones to justify a nearly 12-minute excursion), but for the most part this is tight and very soulful instrumental jazz. I call it “jazz” because it is improvisational soloing over skeletal song beds.

Davis does a great job of holding the music together with rock solid beats and tasteful un-busy accents. Woodard is a funky B3 player in the Groove Holmes or Jimmy McGriff mode, although the album notes indicate he was emulating Jimmy Smith (I didn’t hear much Jimmy Smith-style jazz swing in his playing, more a solid funk groove and superb management of the bass pedals). But the real star of the show is Coffey, whose guitar playing is at turns funky, psychedelic, jazzy, and lyrical. His style is somewhat akin to Gabor Szabo in that, like the Hungarian-born jazz-pop guitarist, he can switch styles quickly and weave in and out of the song’s beat and melody. Also like Szabo, he tends to return to the song’s melody with clean single-note runs. But Coffey’s style is all his own, more leaning toward soul and rock than any contemporary jazz guitarist. And, judging from his Motown work, he was very much at home in the “Factory,” able to adapt his playing to whatever the hit producers needed.

The agility and ability of this band is demonstrated in the set list: opening tune “Fuzz” is pure acid jazz; mid-set the band lays down a fast-paced by jazzy cover of Herbie Hancock’s “Maiden Voyage”; and two songs later the band covers the then-current pop/R&B crossover hit “Casanova (Your Playing Days Are Over).”

Not to be overlooked, the CD booklet is another Resonance Records masterpiece. It includes interviews with Coffey, Davis, Mike Theodore (Coffey’s production partner and producers of these recordings), and legendary singer Bettye LaVette “on the 60’s Detroit club scene.” The ample text may require more than one playing of the CD to read, unless you’re a speed-reader! The booklet and cover art make strong arguments to buy the physical media rather than a download or stream.

Overall, Hot Coffey In the D is a worthy document of a great time and place in music.