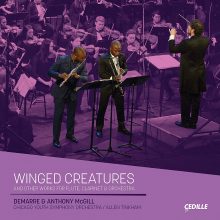 This is not the first time brothers Demarre and Anthony McGill have recorded together on the Chicago-based Cedille label—an earlier album, Portraits (2017), with pianist Michael McHale showcased works for flute, clarinet, and piano trio. In their new release, the McGill brothers emphasize their orchestral roots with four works for flute, clarinet, and orchestra. The album features two world premiere recordings: African American composer Michael Abels’ titular Winged Creatures and Joel Puckett’s Concerto Duo, each commissioned by the Chicago Youth Symphony Orchestra (CYSO) for the McGill brothers. Both Demarre and Anthony are principal performers with some of the top orchestras in the country (Demarre as principal flutist with the Seattle Symphony and Anthony as principal clarinetist with the New York Philharmonic) and their musicianship is clear throughout this recording. Both performers have a beautiful fluidity to their tones and incredibly precise technique—they are masterfully in synch in terms of timbre, intonation, and timing. They are also wonderfully supported by the CYSO led by Music Director Allen Tinkham; it is easy to forget that the orchestral musicians are not professionals themselves.

Abels’ Winged Creatures, as the title implies, musically depicts the fluttering of butterflies, birds, and other animals in flight, at times serene and pastoral, while at other times moving into nervous, agitated passagework. The soloists’ lines shift from homogenous textures to complimentary ones, elongating and commenting on each other’s melodies, sometimes to the point of playful competition. The piece is accompanied by the CYSO throughout, the ensemble where the McGill brothers got their start, which is something that Abels wanted to capitalize on. Describing Winged Creatures, Abel explains the work “contains a musical acknowledgement that the soloists are alumni of the orchestra accompanying them: the soloists’ melody from the exposition is played by the orchestral winds in the recapitulation while the solo parts soar above them. Perhaps one of today’s orchestra members is tomorrow’s soloist.”

The other premiere recording, Concerto Duo, pulls from Puckett’s own childhood and family memories to emphasize the relationship between the McGill brothers. The first movement, “The Great American Scream Machine,” depicts the wooden rollercoaster that “terrified” Puckett in his youth. The movement shows off some of this terror, with often dissonant intervals at the top of the flute and clarinet’s ranges, paired with jazz-inflected scoops and bends to the pitches and rollercoaster-like rapid, technical rising and falling passages. The second movement, “Mama Dee’s Song for Joel”, reminisces over the lullaby Joel’s mother had used to put him to sleep as a child, and in turn by Joel as he attempted to sing his own daughter to sleep. The texture is mostly calm, though sometimes interrupted by orchestral outbursts Puckett describes as “little stomps of a very tired and stubborn…little girl,” finally ending with the lullaby in canon. The last movement, “For Audrey,” was named after the daughter of the CYSO’s general manager Joshua Simonds, and features arpeggios and scalar passages that gradually speed up and morph into the sound of breezes from Southern California, Simonds’ birthplace.

The recording is rounded out with two nineteenth century pieces showcasing the flute and clarinet duo: Franz Danzi’s Sinfonia Concertante, op. 41 from the early 1800s and Saint-Saëns’ Tarantelle, op. 6 from 1857. The Danzi is a fairly typical late classical work, while the Saint-Saens is a jaunty and playful Italian dance, one that the brothers have played together before, notably on an episode of Mr. Rogers’ Neighborhood during their teenage years. On Winged Creatures, these two black classical performers showcase the height of musicianship, accompanied by one of the best youth orchestras in the country—highly recommended!