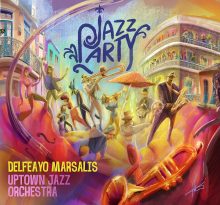 As the title suggests, Jazz Party is a compilation of tunes that embody not only the joyful and celebratory nature of UJO, but the ebullient and cheerful characteristics of the New Orleans community. The title track opens with the vocal stylings of Boyd-Cannon over a gospel-oriented groove coupled with tasteful R&B horn lines, and then transitions into UJO’s foot-stomping rendition of the Dirty Dozen Brass Band’s “Black Special,” featuring Lewis on baritone. The “Seventh Ward Boogaloo” pays tribute to luminaries like Jelly Roll Morton, Sidney Bechet, Lee Dorsey, and Allen Toussaint all of whom have “called the neighborhood home.”

The tune “Raid on the Mingus House Party,” according to Marsalis, was inspired by “aspects of the current social climate in America [that are] heightened by extreme political negativity, mass shootings, and racial community divisions.” Although this track includes ten different melodic ideas performed coherently, Marsalis reminds us that the “love for humanity ultimately reigns victorious in this tale of controlled chaos.” Marsalis slows it down with “Mboya’s Midnight Cocktail,” an imagined after hours bar conversation one might overhear between sets, before transitioning into the riff-based groove of “So New Orleans!” as trumpeter Dr. Brice Miller raps about his experiences and recollections of the Crescent City. Next is the funk-infused “Dr. Hardgroove,” a song that pays tribute to the great and esteemed musician, Roy Hargrove.

Other tracks include a lively performance of The Soul Rebels’ “Let Your Mind Be Free,” Marsalis’ original jump blues composition “Irish Whiskey Blues,” followed by a delightful performance of “Caribbean Second Line” as a way to accentuate the cultural connections between New Orleans and the Caribbean. The album closes with an instrumental version of “Mboya’s Midnight Cocktail,” signaling the notion of the last call and the culmination of the party.

Jazz Party is exactly what the title conveys, a fun, exciting, and highly-spirited sonic collage that captures the nuances of New Orleans musical and cultural expressions. Without a doubt, Delfeayo Marsalis & Uptown Jazz Orchestra have provided the perfect soundtrack for Mardi Gras celebrations.