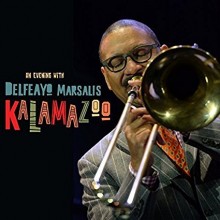 While on tour promoting music from his album, The Last Southern Gentleman (2014), Delfeayo Marsalis’ recorded his first ever live album, Kalamazoo: An Evening with Delfeayo Marsalis. As a collection of mostly jazz standards, mixed with Marsalis’s originals, the album presents unrehearsed, yet polished renditions of these tunes. Kalamazoo captures the creative process and spontaneity of Marsalis’s quartet—Ellis Marsalis (pianist and Delfeayo’s father), Reginald Veal (bass), and Ralph Peterson (drums)—on stage, and presents a collective sound that is pleasing to the listener.

The album begins with a soulful rendition of “Tin Roof Blues,” a slow blues that take us back to the juke joint. The use of blue notes, scooping, and sliding in the ensemble’s performance imitates the vocal timbres and sounds that govern the blues traditions. During his solo, Marsalis also uses vibrato and growls as way of recreating the groans and moans of early blues singers.

Mid-album we hear Ellis Marsalis’s trio on “If I Were a Bell,” featuring Veal and Peterson. Although improvised in the moment, Ellis does not miss a beat as he weaves together melodic and harmonic ideas with syncopated rhythms in his outstanding piano solo. Aside from Ellis’s masterly performance, Veal contributes a flawless bowed bass solo in the style of Slam Stewart, while Peterson adds a vibrant drum solo when trading off with Marsalis.

A delightful moment on this concert is Delfeayo’s performance with Western Michigan University students—Christian O’Neill (vocalist) and Madison George (drums)—on “Blue Kalamazoo.” Marsalis invites them on stage for an impromptu blues performance, and engages in a call-and-response dialogue with O’Neill as they exchange improvised lines and short melodic riffs.

Kalamazoo offers a sonic glimpse into Marsalis’s musical capabilities as a performer and bandleader, while displaying the expressive, dynamic, and virtuosic abilities of each ensemble member. The album is a great example of what happens when jazz musicians get together on the bandstand.