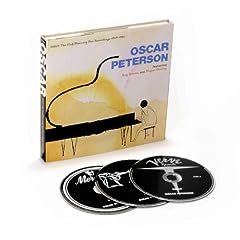 This new three-disc set from Hip-O Select draws together recordings from Oscar Peterson’s first performances in the U.S. in 1949-1950.  All 49 tracks are duo recordings, as Peterson performed with upright bass accompaniment by either Ray Brown or Major “Mule” Holley, in the time before he developed his trio format.  While most of the tracks in this set have been released on earlier albums, Debut compiles them, newly remastered, into a set that captures an early but important stage of Peterson’s career.  Besides early singles and album tracks, this collection also includes a previously unreleased version of the song “There’s A Small Hotel.”  The set is expansively packaged, with liner notes by David Ritz, reproductions of album covers, and a lengthy discography.