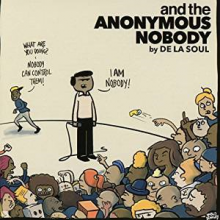 Title: and the Anonymous Nobody…

While De La Soul’s heyday was arguably in the 1990s, the group remains a strong presence in hip hop, despite the fact that the last time it released new music was in 2004. This is largely because De La’s jazz-influenced sound set the template for Kendrick Lamar and others who borrow samples and approaches from jazz music and in part because their classic records age like fine wine, still sounding fresh some 20 years later.  The group’s most recent release prior to this August was 2014’s Smell the D.A.I.S.Y., a digital download full of re-recordings of classic tracks (along with a complimentary download of the entire back catalog for email subscribers!), a gesture that now feels like a primer for this year’s new release. and the Anonymous Nobody… is a kickstarter-funded, genre-bending record that may leave old fans scratching their heads—the album seems to be both a victory lap and a comeback record. Following is the group’s short documentary about the making of the album:

De La Soul probably didn’t need to release a new record in 2016—or any year for that matter—and the foremost question in many readers’ minds may be whether there is anything really new here, or whether and the Anonymous Nobody… is just a rehash of the group’s ‘90s sound that has a few more gray hairs.  While there are certainly elements of the group’s signature sound (as on the jazz-influenced “Royalty Capes”), the album seems primarily to revolve around the group’s rotating cast of guest stars, a roster that includes Jill Scott, Snoop Dogg, David Byrne, Usher, 2 Chainz, and Damon Albarn.  What the supporting personnel have in common with De La is that many listeners may wax nostalgic about their music—this is the “I remember when…” crowd.  While this is not necessarily a liability, it sets the stage for a wash of sounds and approaches that, ultimately, we’ve heard before. For instance, the track featuring David Byrne, “Snoopies,” draws heavily from Byrne’s bag of electro-pop sensibilities. Similarly, “Greyhounds,” a somewhat antiquated girl-corrupted-by-the-big-city story, leans stylistically on Usher’s well-established R&B fusion.  At other moments, this record just gets weird—De La Soul was always on the eccentric end of the hip hop spectrum, but when Justin Hawkins of the Darkness leads a Queen-esque overdubbed vocal and guitar orchestra, it may get lost on the listener that this is an album by the legendary rap group.  In short, the guest stars often overshadow the core group.

While working with a live band proves an asset, meandering effortlessly from rock to neo-soul, ultimately the intensity of the record, both lyrically and musically, lags at times. And the Anonymous Nobody… plays like many records with a large cast of extras do—providing a great first listen with diminishing returns.  This is both a testament to De La Soul’s versatility and an indication that the group of vets is open to trying something new, with experimentation sometimes leading to mixed results.