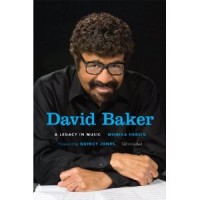 David N. Baker, the renowned musician, composer, and educator who has served as Chair of the Jazz Studies Department at the Indiana University Jacobs School of Music for several decades, recently celebrated his 80th birthday.  This exhaustive biography, published a month prior to his birthday, is just one of the ways Baker’s contributions to the music world will be commemorated in the coming year (see the Baker Legacy website). Written in part by IU colleague Monika Herzig, the book is more of a festschrift, with contributions from Lissa May (“Indiana Avenue and Crispus Attucks High School”), Nathan Davis (“New Beginnings”), JB Dyas (“Defining Jazz Education”), Brent Wallarab (“21st Century Bebop”), David Ward-Steinman (“The Composer”), John Edward Hasse (“David Baker and the Smithsonian”), and Willard Jenkins (“Social Engagement”), with a forward by Quincy Jones, a long-time friend of Baker.

Though the majority of the book’s focus, as one might expect, is on jazz performance and education, the chapter by Ward-Steinman is devoted to Baker as composer and presents a detailed analysis of selected works. Many may not realize that Baker has composed more than 2,000 compositions, including jazz, symphonic and chamber works, and hundreds of arrangements. Thus one of the major contributions of the book is Appendix A, an alphabetical annotated list of Baker’s original works meticulously compiled by Lida Baker, which documents the broad range of his creative genius.  Other appendices list Baker’s many awards and honors, national and international service to numerous organizations, performing groups, teaching appointments, and professional societies, followed by a “Bibliography of Written Works,” “Discography,” and “Selected List of Books, Articles, and other Publications about David Baker.” An accompanying CD, edited and mastered by Konrad Strauss (JSOM Dir. of Recording Arts), offers a sampling of works recorded between 1959-2006. Highlights include “”Dizzy” from Singers of Songs, Weavers of Dreams-Through the Prism of the Black Experience, performed by the Audubon Quartet with Janos Starker and George Gaber, and  “Le Miroir noir” from Le Chat qui pêche featuring the Louisville Orchestra.

Overall, this is a fine tribute to the Indianapolis native and Living Jazz Legend, illuminating his 60-year career as performer, composer, and educator.

Editor’s Note:  Those in Bloomington won’t want to miss the forthcoming “David Baker 80th Birthday Celebration” concert on January 21, 2012, which will feature many of Baker’s colleagues and former students; a panel discussion with Baker and Herzig will be held prior to the concert.  Admission is free but requires tickets, available from the MAC box office beginning Tuesday, Jan. 10. Those not in Bloomington may still enjoy the event via a live video-stream.