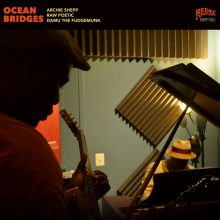 One of the most intriguing projects of the year, Ocean Bridges is a collaboration between Washington, DC hip hop artists/producers Damu the Fudgemunk (aka Earl Davis) and MC Raw Poetic (aka Jason Moore), and Moore’s uncle, the illustrious jazz elder Archie Shepp. The album’s title signifies “a re-establishing of the connection between young and old in their general community.” As Moore explains: “I began writing down the parts in my head that could tell a story, a Black American story, that would expand across the ages, a story from my grandfather to my uncle, from my mother to me. We bridged the gaps of time, culture and struggle and made an album I always dreamt of—Ocean Bridges.” Entirely improvised, the eleven tracks also bridge genres, creatively blending live music and spoken word, jazz and hip hop in a manner that maintains the spontaneity of their vision.

Though alternating between brief segments of music and reflections by Shepp, sequentially titled “Professor Shipp’s Agenda 1-7,” and extended sets, the tracks are wholly integrated and not divided by genre. Shepp, who performs on tenor and soprano sax as well as Wurlitzer electric piano, is joined by a younger crew of DC-area jazz musicians, including guitarist Pat Fritz, keyboardist Aaron Gause, bassist Luke Stewart, tenor sax and percussionist Jamal Moore, percussionist Bashi Rose, and Damu on drums and vibes. In an interview on Bandcamp, Damu and Raw Poetic explained: “The only thing we planned was who was there…as far as direction, concept, energy, feel and even the collection of instruments…everything just came together organically.” After the sessions concluded, Raw Poetic and Damu took over the post-production, overdubbing vocals and turntable scratches. In order to maintain the spontaneity of the live sessions, the producers tried to listen to each track as though hearing it for the first time, then layered parts on the fly in one take.

The album opens with the first single, “Learning to Breathe,” a brief but delectable taste of what’s to come. On “Tulips,” Moore weaves compelling rhymes through the dense textures of the ensemble, concluding “I do it alone/just stay in my zone/don’t need nobody help.” The band quickly responds, “What about Uncle Archie?,” setting the stage for an extended sax solo by Shepp before the track concludes with to the band repeat the refrain, “We got jazz, we got soul, we got jazz, we got soul.” Clocking in at over 12 minutes, “Aperture” is a perfect pairing of Damu’s vibes smoothing the way for Raw Poetic’s inspiring flow, with Shepp interjecting sax riffs throughout. Other highlights include the extended jam “Sugar Coat It,” with Damu adding textures via turntables as Raw Poetic rhymes, “Gotta hear from my people, gonna go wherever we go…emphasize what we live for.” For a change of pace, the melodic “12 Hour Parking” is awash in keyboards and vibes that give the track more of a soul-jazz meets hip hop feel.

During the recording session for Ocean Bridges, Raw Poetic and Damu said, “Everybody who was onsite knew that something special was taking place,” and listeners will likely agree. The album is definitely worth checking out, especially if you’re a fan of contemporary jazz or golden age socially conscious hip hop.