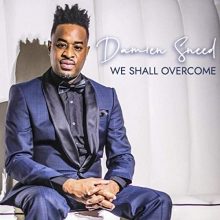 Conceived as a celebration of the 35th anniversary of Martin Luther King, Jr. Day, Damien Sneed’s We Shall Overcome is an album steeped in the African American experience. In honoring Dr. King, Sneed chose to follow in the footsteps of artists that “have used their platform to proclaim songs of protest and reconciliation in response to the main issues in our homes, schools, government, nation and the world abroad.” The multi-talented pianist, vocalist, composer and arranger effortlessly crosses genres, delivering a cohesive 18-track collection that pays homage to civil rights anthems, Negro spirituals, classical composers, and iconic jazz, soul, and gospel musicians. This should come as no surprise from one who has worked with artists ranging from Jessye Norman and Lawrence Brownlee to The Clark Sisters, Richard Smallwood, Aretha Franklin, Wynton Marsalis, and Stevie Wonder, to name just a few.

Similar to Sneed’s 2018 three-disc set, The Three Sides of Damien Sneed, his new album (which includes some tracks from the 2018 release) is also divided into three sections, showcasing his mastery of classical, jazz and “sanctified soul.” Sneed opens with his eloquent performance of Hale Smith’s “Evocation” (1966), a short twelve-tone piece for solo piano with occasional jazz inflections. He then offers a new arrangement of Samuel Coleridge-Taylor’s “Deep River” (from 24 Negro Melodies, Op. 59), expanding what was originally a solo piano work into a duo with violin, performed by rising star  Randall Goosby. Drawing from a poem by Langston Hughes, Sneed’s stirring original song “I Dream a World,” performed with baritone Justin Austin, is a fine addition to classical piano-vocal literature that will likely find its way onto many recital programs.

Moving into the next section of the album, Sneed pays homage to several giants of jazz, performing both piano and vocals on heartfelt renditions of Billie Holiday’s “God Bless the Child,” Billy Taylor’s “I Wish I Knew How It Would Feel To Be Free,” Duke Ellington’s “Come Sunday,” and Bobby Timmons’ popular jazz standard “Moanin’.”  Here he is backed by Ben Williams on upright bass and Jonathan Barber on drums, with Julius Rodriguez taking over the keyboard on “I Wish I Knew.” Transitioning to the sacred, Sneed offers jazzy, uptempo versions of the spirituals “Walk With Me” and “Wade in the Water,” and gospel arrangements of “Follow the Drinking Gourd” and “You’ve Got to Move,” the latter featuring a trio of female background vocalists and Marquez Cassidy on the Hammond B3. Also included is the James Cleveland standard, “I Don’t Feel No Ways Tired,” featuring a powerful performance by Anitra McKinney on lead vocals.

The final section harkens back to iconic songs of protest and resilience from the ‘60s and ‘70s, including the Tina Turner hit “Proud Mary” featuring the scorching vocals of Matia Washington, Sneed’s cover of “What’s Going On” which closely follows Marvin Gaye’s original right down to the vocal timbre, and “Bridge Over Troubled Water” with Chenee Campbell singing the lead in the style of Aretha Franklin. The album concludes with a pair of contemporary freedom songs—the inspirational “You Can Be Free,” composed and performed by Quinn Brown, and a new arrangement of “We Shall Overcome.” The latter incorporates spoken word verses by poet A. Orlando Watson addressing police brutality, the prison industrial complex, gentrification and more, providing an extremely powerful close to this project.