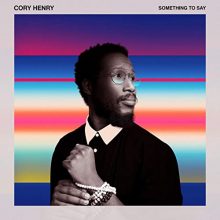 Singer, composer, producer and multi-instrumentalist Cory Henry has released his much anticipated studio album, Something To Say. Produced by Henry himself, the album wonderfully expresses Henry’s wide variety of musical talents in each of its eleven tracks, which tackle subjects ranging from love and breakups to injustices and the effects of being emotionally drained, resulting in a project that artistically reflects the climate of the world today. “I feel good because all of the songs came together and they mean something to me,” Henry humbly advises, “so I hope they mean something to other people.”

The album begins with “Don’t Forget,” a prime example of Henry’s signature “future soul” genre, providing danceable beats and funky vibes while reminding listeners, “Please don’t forget what you’re living for, and please don’t forget what you’re fighting for.” This upbeat and optimistic sound continues in tracks like “Happy Days,” the album’s bouncy debut single, and the R&B inspired “Gawtdamn.” Named a Top Tune by KCRW, “Rise” is another upbeat standout single written to inspire people in every country to come together and rise up to make a better world.

Transitioning to more serious tones in the second half of the album, songs focus on socially relevant subjects such as racial injustice, Black Lives Matter, police brutality and gun violence with tracks like “Icarus” and “Black Man.” On “No Guns,” Henry sings above a beautiful melody in protest to violence and strife, expressing his dreams for unity and solidarity.

Something To Say is truly incredible in the way it highlights many heavy, laborious, and even painful topics in such an inspiring and artful way. These subjects can be very emotionally draining to dissect, yet convey to listeners a sense of invigoration and hope. Highly recommended for Cory Henry’s beautifully honest social commentary, as well as his amazing artistry and production.