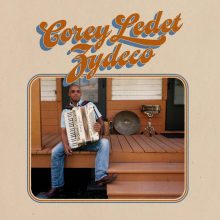 Corey hails from a long line of Louisiana musicians, beginning with his great-grandfather Gabriel Ledet who played for jazz legend Bunk Johnson as an upright bassist. His grandfather Buchanan was Zydeco’s first drummer, inventing the “double clutching” drumming pattern that is an integral part of the genre today. Numerous other members of his extended French-speaking Creole family also went on to play both professionally and non-professionally. It’s no surprise then that Corey has risen to Zydeco royalty in the 21st century.

For his new album, Ledet decided to delve even further into his family heritage by studying Kouri-Vini, a regional Creole dialect spoken by family members that he incorporated into songs such as “M’ap marché,” the slow grooving “Pèl mò,” and the closing track “Arèt tô trin.” In his music, Ledet also blends old and new styles of Zydeco, giving a nod to his grandfather on “Buchanan Ledet Special,” and pulling inspiration from the many diverse musicians that he has studied. Some, like Clifton Chenier and Rockin’ Dopsie, even played with Ledet’s ancestors. Other tracks, such as “Flip Flop and Fly,” is more of an uptempo jump blues while “It’s Gonna Be Alright” features a R&B vocal style over a Zydeco foundation.

Corey Ledet Zydeco is a must-listen for fans of the genre as Ledet explores the multi-faceted history of Zydeco music through the lens of his family’s Creole traditions. If you want to hear another side of Ledet, check out his new 45 single with Soul Créole, a band he formed with the producer of this album, Louis Michot, and his wife, Ashlée Michot.