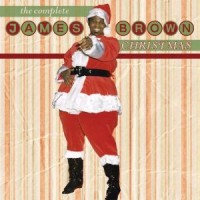 –
The folks at Hip-O Select have released a  2-CD set marking the first time that all three of JB’s original Christmas albums— Christmas Songs (1966), A Soulful Christmas (1968) and Hey America (1970) —have been available together in their entirety on CD.  Selections include cult faves such as “Santa Claus Go Straight to the Ghetto,” “Santa Claus Is Definitely Here To Stay,” and “Believers Shall Enjoy (Non Believers Shall Suffer).”  Also included are rare bonus singles such as “It’s Christmas Time,” “You Know It,” and a sing-along version of “Hey America,” all featured in stereo for the first time.

Only the late, great James Brown could combine the joy and pathos of the season in this soulful manner, while still offering plenty of hope, wisdom and inspiration.  Though this set doesn’t appear to be a limited addition, Hip-O Select compilations often sell out quickly so consider yourself forewarned.