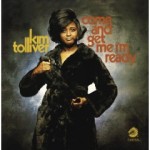 “Music is a cruel business where talent never guarantees commercial success and Kim’s name is not half as well known as it should be.” -John Ridley, August 2007

Dorothy Kimberly Tolliver was born on June 21, 1937, and raised in Cleveland. She sang in local churches and eventually found her way to secular music, performing in clubs and bars in the late 1950s. In 1968 she released four 45s on the Rojac label, including her first single, “I’ll Try To Do Better,” a slow ballad of immense maturity and conviction. Tolliver’s debut album was cut in 1971 and self-produced with Freddie Briggs. When he couldn’t get Stax interested in the project, Briggs pressed copies on his own Kimbrig label. In 1973 Chess took notice of Tolliver and released her second album, Come and Get Me, I’m Ready. Though her recordings never sold well, Tolliver developed a following and toured both in the U.S. and abroad.

Come And Get Me, I’m Ready is a classic deep soul tour-de-force, reminiscent of R&B artists Eddie Levert, Millie Jackson, Betty Wright and Mavis Staples.  This CD is the first of her material to be officially remastered and reissued, and contains some of her best songs. Tolliver is primarily a storyteller, lamenting her woes of lost love in an R&B framework that evokes country, blues and gospel. Similar to many blues women, Tolliver unabashedly sings her desire to love and makes no apology for her decision to love whom she chooses, regardless if the object of her affection loves her back.

Unlike many of her contemporaries, Tolliver wrote solo and collaborated with husband Freddie Briggs on seven of the nine tracks, including “I’m Losing the Feeling,” “She Don’t Know You (Like I Do),” and “The Other Side of Town.” At first listen, it is apparent that Tolliver has great vocal skills. The production quality is only adequate and some of the tracks are laden with heavy orchestration, diminishing Tolliver’s vocals which are not allowed to truly shine. However, her talent is very evident and incites much sparkle.

Sadly, Kim Tolliver passed away in 2007 before this reissue project came to fruition. Perhaps this new edition of Come And Get Me, I’m Ready will find the audience that Tolliver never managed to reach during her lifetime.