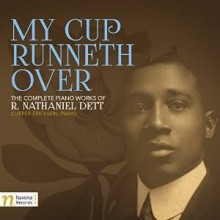 Title: My Cup Runneth Over – The Complete Piano Works of R. Nathaniel Dett

Nathaniel Dett (1882-1943) was one of the most important and highly regarded Black composers of the early twentieth century. At that time, only a few had achieved widespread success in the classical music genre, most notably the British composer Samuel Coleridge-Taylor. Though born on the Canadian side of Niagara Falls, Dett’s father was a U.S. citizen and during his youth the family relocated to the New York side of Niagara, thus he is usually considered to be an American composer. The Oberlin educated Dett was also a noted concert pianist, choral conductor and educator.

My Cup Runneth Over: The Complete Piano Works of R. Nathaniel Dett gathers together, for the first time on CD, Dett’s solo piano compositions, brilliantly performed by Clipper Erickson (an alum of The Juilliard School, Yale University, and Indiana University). Like his mentor and teacher, British pianist John Ogdon (who taught at IU’s Jacobs School of Music in the late 1970s), Erickson has championed 20th and 21st-century music and American composers, in particular.  He was introduced to Dett’s music by Dr. Donald Dumpson, currently on the faculty of Rider University, who like Dett is also a noted keyboardist, choral conductor, composer and arranger. Thankfully, their relationship inspired this recording project, which recently garnered an Editor’s Choice citation from Gramophone UK—now let’s hope it receives wider recognition in the U.S.

My Cup Runneth Over features Dett’s neo-Romantic piano suites which were widely performed by artists such as Percy Grainger and Fanny Bloomfield-Zeisler. The CD opens with the earliest suite, Magnolia, composed in 1912. As one might guess from the title, the five movements call forth images of the Old South with names such as “The Deserted Cabin” and “Mammy,” though the final movement, “The Place Where the Rainbow Ends” was based on a poem by Paul Laurence Dunbar. In the Bottoms, composed the following year, is another five movement suite based on “scenes peculiar to Negro life in the river bottoms of the Southern sections of North America” (quoted from Dett’s own notes). Included is one of his most popular works, the folk-song based “Juba Dance,” played by Erickson with great clarity and verve.[i]

The year 1922 was obviously a productive year for Dett, which yielded works of increasing complexity: the four movement suite Enchantment (dedicated to Percy Grainger) and the solo piece Nepenthe and the Muse (dedicated to Arthur Foote)—a Debussy-esque work of shifting moods and tone colors convincingly performed by Erickson. Disc One closes with another programmatic suite, Cinnamon Grove; each movement based on poems and concluding with an Allegretto referencing two spirituals later used by Dett for choral settings.

Disc Two opens with Tropical Winter (1938), a demanding suite in seven movements which presents a leap forward in Dett’s compositional style.  “Parade of the Jasmine Banners” and, in particular, the more contemplative “Legends of the Atoll” are highlights of this suite. Dett’s final suite, Eight Bible Vignettes (1942-43), was composed at the very end of his life—possibly contributing to his use of Biblical texts as inspiration. Divided evenly between the Old and New Testaments, the movements reference many themes, including the African diaspora and slavery, expressed through some of the most heart-rending and insightful music Dett composed. Erickson eloquently breaks down each movement in the liner notes, indicating the intensity of his research which obviously aided his meticulous and multifaceted interpretation.

Not addressed in the liner notes are three of Dett’s earliest solo piano works that close the album: the ragtime based After the Cakewalk (1900), the march and two-step Cave of the Winds (1902), and the much more substantial show piece Inspiration Waltzes (1903), which Erickson performs with aplomb.

[i]Dett had performed these works himself, to great acclaim, at the first All-Colored Composer’s Concert at Chicago’s Orchestra Hall on June 3, 1914. Noted music critic and composer Felix Borowski, writing for the Record Herald on June 4 proclaimed, ” . . .it was not Coleridge-Taylor whose music at this concert disclosed the largest measure of individuality and inspiration.  Those qualities shone more brilliantly in two suites for piano composed and performed by R. Nathaniel Dett.  Without having heard of Mr. Dett or his music before, we believe that his abilities are such as to qualify him for leadership of the musical creators among his people . . . This composer’s performance was also a surprise.  Piano playing much less admirable, much less poetic, has often been heard in Orchestra Hall and in concerts much more pretentious than that which has formed the subject of this review.” [June 4, 1914]