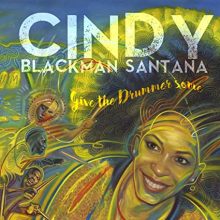 Opening with an arrangement of John Lennon’s “Imagine,” Cindy covers the vocals and percussion while Carlos adds guitar embellishments, leading up to an emotional finale featuring a gospel-styled chorus of background singers. The instrumental “We Came to Play” is a tour de force highlighting the rhythmically complex interplay between Cindy and John McLaughlin. Bringing on the funk, the song “She’s Got It Goin’ On” perfectly describes the drummer as she sings, “from dusk til dawn she’s piling it on, knows just what to do, she’s quick she’s mean, a dancing machine, she floats into her groove.” The Miles Davis tribute, “Miles Away,” co-written and performed by Cindy and trumpeter Bill Ortiz, presents a more complex form of jazz-rock fusion, and stands apart from other tracks on the album. Cindy gets plenty of opportunity to showcase her formidable percussion chops on the solo-oriented tracks “Velocity,” “I Need a Drummer” and “Mother Earth,” and also shines on the soulful ballad, “You Don’t Want to Break My Heart,” made all the more intimate as Carlos’ answers through emotive guitar riffs.

Other album highlights include the hard rock “Evolution Revolution” featuring the dueling guitars of Hammett and Reid, and the super funky song “Superbad,” an off-the charts performance by Cindy and McLaughlin with plenty of shredding as they channel the Godfather of funk himself. Last but certainly not least, there are two notable socially conscious tracks. “Change Is In Your Hands” and “Social Justice” switches things up Public Enemy style, with a hip hop oriented production and rapping by Santana’s Andy Vargas. Concluding with the soulful sounds of “Black Pearl,” written by Carlos, the album drifts away on a mellow groove, with Carlos and Reid trading distorted guitar licks as Cindy stays in the pocket and propels the track to the finish line.

Give the Drummer Some is a must have for any fan of jazz-rock fusion, and a fitting showcase for Cindy Blackman Santana, arguably one of the world’s leading female drummers.