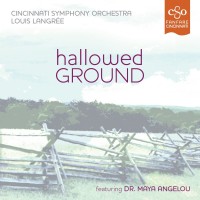 Hallowed Ground, the Cincinnati Symphony Orchestra’s first commercial recording under Music Director Louis Langrée, features three works from his inaugural concerts that were “inspired by sacred spaces, from the battlefield to incredible vistas to beautiful community gathering points.” But that’s only one of the thematic connections between the music.

As the nation celebrated the 150th anniversary of Abraham Lincoln’s Gettysburg Address in November 2013, the CSO commemorated the occasion with a performance of Aaron Copland’s Lincoln Portrait, a work premiered by the Orchestra in 1942.  In fact, Hallowed Ground draws its title from a passage in the Gettysburg Address, which is among the speeches quoted in the text of Lincoln Portrait.  Adding her distinctive voice to the performance is legendary author/poet/activist Maya Angelou, who serves as narrator.  During her pre-concert conversation, Angelou stated “You can’t be African-American and not have some particular close relationship with Abraham Lincoln. It’s amazing that we have lived through racism, sexism and ageism—all stupidity.” She also spoke about how deeply moved she was during the dress rehearsal while reading the Gettysburg Address section: “When I heard the orchestra, they lifted me out of myself, and I was suddenly on that battlefield, seeing the bodies…”[1]  Her emotions come across clearly in this live recording, which no doubt will be added to the list of seminal readings of the work, especially since it was one Angelou’s last public performances before to her death. Hallowed ground indeed.

Following is the world premiere of Mountain by Pulitzer Prize winning composer David Lang, commissioned by the CSO and recorded live on March 22, 2014. Lang was asked to commemorate the legacy of a great American and chose Copland due to his connection with the Orchestra (the CSO also commissioned and premiered Fanfare for the Common Man in 1942). Lang notes that Copland “used music to discover what being American meant,” while others used Copland’s music to express the “way we think of the relationship between our land and our selves.” Hence the title Mountain, which reflects the nature motif, yet also invokes the eternal.  Lang achieves a cinematic quality, opening with thunderous chords followed by a measure of silence. This pattern repeats in minimalist fashion throughout, the silence gradually filled with sonorous long tones echoing through the winds, becoming increasingly complex as the piece concludes.

The final work on the disc, Pleasure Ground by Nico Muhly, is yet another world premiere with deep connections to American history. A portrait in three continuous movements, the programmatic work depicts the life of landscape architect Frederick Law Olmstead and features baritone Nathan Wyatt. As with the previous work, the performance was recorded in March 2014 as part of the MusicNOW Festival.

Through his study of Oldstead’s formal and private writings, Muhly discovered the landscape architect was “a melancholic deeply affected by his time in the Civil War” as well as “his private anguish about how his work had been mangled and abused.” The challenge was to reflect the transitions in Olmstead’s life through music, drawing upon his writings for the vocal text. But Pleasure Ground is also a play on words, referencing “a recurring bass line that gives structure and melodic content” to the work, often in a rather subversive manner.

As the first movement begins, the orchestral passages encapsulate the eager optimism of youth, at first irrepressibly energetic, then turning more contemplative when the baritone enters, singing about “sensitivity to the beautiful.” As the tension builds the music turns somewhat darker, with Olmstead encountering his initial struggle to “direct nature.” Text from Olmstead’s letters written during the Civil War are set to music in the haunting second movement, which uses a cycle of 12 chords to punctuate tragic moments.  The final movement finds Olmstead at the peak of his career, reflecting upon his achievements, such as his “attempt to develop open wooded or parklike scenary.” But problems inevitably ensue—nature begins to overrun his designs, illustrated through Muhly’s dense scoring for celeste, glockenspiel, harp, and a small gamelan. The work concludes with Wyatt repeating, “If man is not to live by bread alone, what is better worth doing well than the planting of trees?” Muhly’s expressive writing is extremely accessible, and the work is given an expert reading by Wyatt and the CSO. I expect Pleasure Ground will be programmed by other orchestras, particularly in cities such as New York and Chicago where Olmstead’s iconic parks define the urban landscape.