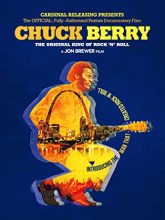 Back in 1987, while the legendary rock and roll icon Chuck Berry was still alive and performing, the documentary Chuck Berry – Hail! Hail! Rock N’ Roll was released in celebration of the musician’s 60th birthday, but the primarily focus was on two 1986 concerts. Director Jon Brewer (also responsible for great documentaries on B.B. King and Nat King Cole) uses some of that footage for this wonderful new 97-minute film, The Original King of Rock ‘N’ Roll, including clips with Berry’s contemporaries, Little Richard and Bo Diddley. This if the first feature-length documentary on the life and music of Berry, taking us on a journey from his early years right up to the present day.

As Brewer chronicles Berry’s life, he places a lot of emphasis on his role as a “family man” through interviews with his widow, Themetta “Toddy” Suggs, and his children. Other prominent interviewees include Keith Richards,Mick Jagger, Jerry Lee Lewis, Berry’s longtime piano player Johnnie Johnson, and Gary Clark Jr. There are a few “recreations” of the early years using very creative colorized black and white images that give the film a “contemporary” look. Though available on streaming services, you’ll want the DVD or Blu-Ray versions which contain over 100 minutes (longer than the film itself) of extended interviews, each averaging ten minutes or more. These bonus interviews feature Alice Cooper, Gene Simmons, Joe Bonamassa, George Thorogood, Charles Berry Jr. (Chuck’s son), and more.

Brewer knows how to capture a musician’s life and influence on the music scene, and Chuck Berry is given his due as (in the words of George Thorogood), “the most important guitarist in rock music history.”