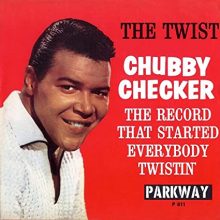 First and foremost, there’s a newly remastered 7-in. 45 rpm single that replicates the original Cameo Parkway release, featuring “The Twist” on the A-side and the songs “Toot” and “Twistin’ USA” on the B-side. Checker’s definitive Dancin’ Party: The Chubby Checker Collection (1960–1966) has been reissued on both CD and LP with excellent new liner notes by John Broven. This compilation features 21 songs of which 17 charted in the Top 40, including the pinnacle recording of “The Twist” as well the follow-up, “Let’s Twist Again,” which won a Grammy™ Award for Best Rock & Roll Recording of 1961. Likewise, a remastered edition of his 1960 album, Twist With Chubby Checker, has been released on vinyl.

Also reissued on the September 25th anniversary are CD versions of two other newly compiled Cameo Parkway sets that feature Checker and his label mates. You Got The Power: Cameo Parkway Northern Soul 1964-1967 highlights many of the Cameo Parkway singles that fueled Britain’s Northern Soul scene by artists ranging from Frankie Beverly & The Butlers to Bunny Sigler and the girl group Candy and the Kisses. Liner notes are provided by an expert on the scene, Ady Croasdell, a DJ who London’s longest-running Northern Soul night at his 6Ts Rhythm ‘N’ Soul Club. You Can’t Sit Down: Cameo Parkway Dance Crazes 1958–1964 features other dance hits by Cameo Parkway stars such as Dee Dee Sharp’s “Mashed Potato Time,” with informative liner notes once again provided by John Broven.

In his liner notes to Dancin’ Party, Broven concludes: “In truth, Chubby Checker’s “Dancin’ Party” has never stopped, with the records still sounding as fresh as ever. He’s performing to this day, with the slogan, “We come to town, we burn it down and we go home.” So cheers to Chubby Checker, still burning down the house as one of the few remaining African American originators of rock and roll.