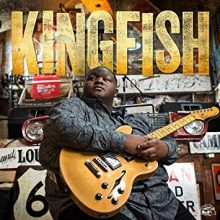 Christone “Kingfish” Ingram has been making waves in the blues community and beyond with his natural musical talent, soulful vocals, and compelling songwriting. The 20-year-old guitarist has the passion of a young performer as well as a commitment to the Delta blues tradition, established just outside his hometown of Clarksdale, Mississippi. Ingram’s debut album, Kingfish, is a collection of tracks that, while inspired by the work of blues legends like Buddy Guy, are unique to the young performer. The album’s songs range from autobiographical (“Been Here Before”) to humorous (“Trouble”) and slow and searing (“Love Ain’t My Favorite Thing”).

Called “a rising blues prodigy” by NPR Music, Ingram’s videos have been promoted by the likes of funk legend Bootsy Collins and rapper The Game, while his music has also been featured on the Netflix series Luke Cage—a testament to his huge cross-over appeal. On the album’s lead track, “Outside of This Town,” Ingram showcases his songwriting ability and prodigious guitar technique as well as a vocal intensity that belies his age:

Whether he is channeling Prince in Purple Rain or Jimi Hendrix on “Hey Joe,” Christone “Kingfish” Ingram is proving that the blues tradition is alive and well among young artists. As he recently stated, “In my town, every kid wants to be a rapper. I wanted to do something no one else was doing.” Who better to go against the grain than a kid whose mother is first cousin to groundbreaking country music legend Charley Pride.  If you enjoy Kingfish you may not have to wait long for more new music. Ingram says, “I have a lot to say, so please stay tuned.”