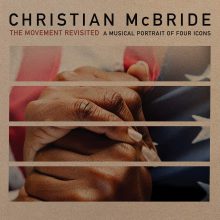 McBride’s work began as a suite,commissioned in 1998 for the Portland (Maine) Arts Society and scored for jazz quartet and gospel choir, with J.D. Steele contributing the choral arrangements. While working as the Los Angeles Philharmonic’s Creative Chair for Jazz in 2008, McBride was inspired to orchestrate his opus for a big band performance at the Walt Disney Concert Hall.

The Movement Revisited features narrated excerpts of texts that best represent the voices of the four luminaries on movements such as “Sister Rosa – Prologue,” “Brother Malcolm – Prologue,” “Ali Speaks,” and “Soldiers (I Have a Dream).” This is an effective strategy, giving the impression that these icons are together in a conference room discussing different aspects of the everyday lived experiences and the uplifting of the Black community. After Barack Obama was elected President, McBride was approached by the director of the Detroit Jazz Festival to compose an additional section celebrating his election. Now the final movement of the suite, “Apotheosis November 4th 2008” articulates Obama’s 2008 acceptance speech through the voices of the four luminaries who, in different ways, laid the foundation for such a historical moment—the appointment of a Black president of the United States. The movement closes with the choir singing, “Free at last, free at last. Thank God Almighty, we are free at last.”

Although McBride states that The Movement Revisited is “personal, [and] not a musical portrait of the Civil Rights Movement,” his masterpiece inspires us to reflect on the legacies and contributions of these iconic figures as we continue to aspire to social/racial equality and change in our society.