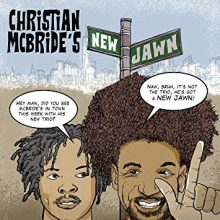 When searching for a name that reflected the grit and vibrant sound of the quartet, descriptors such as “quartet” and “group” seemed too buttoned up for this ensemble’s dynamic expressions. Turning towards the colloquialisms of his city, McBride decided on the word “jawn,” which refers to something or someone having “a certain hip cachet, and a heavy dose of soul.”

Christian McBride’s New Jawn finds itself within the continuum of the jazz and blues traditions. Traces of swing, hard bop, modal jazz and neo-bop are all heard throughout this album. While all of these elements demonstrate the group’s musicianship and brilliance, one fascinating aspect of this album is the omission of chordal accompaniment; another is the musical ingenuity of these four collaborators. There is never a sense of a lack of piano or guitar support. McBride and Waits provide the foundational groove, rhythm and time, while Evans and Strickland contribute melodic phrases that create harmonic textures above the rhythm section.

On the opening blues tune, “Walking Funny,” we hear a creative exchange between horns and rhythm section. While the horns perform the head in two part harmony, the saxophone doubles the bass line between melodic phrases, filling in the space where a pianist or guitarists would normally play. On the more up-tempo tunes such as “The Middle Man” and “Sightseeing,” we hear the creative use of octave unisons in the horns with hits contrary to the rhythm section, recreating the harmonic and rhythmic comping hits that are usually the responsibility of chordal instruments. To say McBride’s New Jawn accomplished a major feat with this chordless configuration would certainly be an understatement.

It goes without saying that McBride’s robust and inventive sound, virtuosic playing, and overall musical genius is felt throughout this entire album. Christian McBride’s New Jawn is by far one of the best sounding chordless productions I have listened to, and is most definitely a trend-setter.