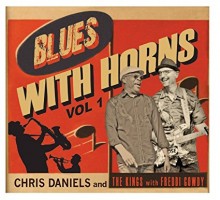 Artist: Chris Daniels and The Kings with Freddi Gowdy

Freddi Gowdy was a founding member (with Henchi Graves) of the ‘60s soul duo Freddi/Henchi and the Soulsetters, memorialized in the 2010 compilation Crown Princes of Funk: The Last Set. In the ‘70s, Freddi/Henchi relocated to Colorado where they became known as “the hottest funk-machine west of the Mississippi,” opening for major touring artists including James Brown and Tina Turner. After Graves passed in 2009, Gowdy hooked up with another well-known Colorado group, Chris Daniels and The Kings. The title of their second collaboration begs the question, “what could be better than blues with horns?

Blues with Horns, Vol. 1 showcases Chris Daniels love of classic horn bands from the 1950s-1970s. The ten horn-driven tracks led by Gowdy’s soulful vocals offer the perfect cure for your winter blues. The album gets off to a rousing start with the ode to “Sweet Memphis” featuring Sonny Landreth on slide-guitar and Subdudes keyboardist John Magnie:

This segues into “Fried Food/Hard Liquor,” a celebration of down home blues, juke joints and “greasy lips barbeque.” The song is punctuated by harmonica and guitar riffs, which along with the horn section, often depart from anticipated harmonic progressions. Gowdy’s “Get Up Off the Funk” is an obvious tribute to James Brown, offering a workout for the horns with tasty riffs from sax player Jim Waddell.

There are also a number of covers on the album. Highlights among these include Bobby Blue Bland’s “Wouldn’t Treat a Dog (The Way You Treated Me),” a fun and funky rendition of Johnny “Guitar” Watson’s “Baby’s In Love With the Radio” that tosses out some contemporary references to Spotify and Rhapsody, and a harmonica-infused version of Buddy Miles’ funk-rock classic, “Them Changes.” The project concludes with “Rain Check,” another original by Daniels, who takes over the vocals on this acoustic, ragtime influenced song that reflects on surviving cancer and living life to the fullest (Daniels and Gowdy have both battled cancer in the past).

Blues with Horns, Vol. 1 admirably serves the band’s mission of keeping the New Orleans-Memphis horn-band-blues tradition alive.  As Daniels states in the liner note, “this music came from black culture and countless inspirations . . . we only scratched the surface” in this volume. As an added bonus, the CD comes in a pop-up book style limited-edition packaging by famed artist Greg Carr. As Gowdy sings in “Baby’s In Love With the Radio,” give me more of that funk, rock and blues music! Let’s hope volume two is already in the works.