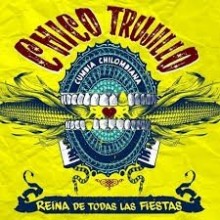 The group Chico Trujillo was formed fifteen years ago in the little town of Villa Aleman, just outside the colorful seaside city of Valparaíso, Chile. In informal gatherings, singer Aldo “Macha” Asenjo and his punk band La Floripondio played old cumbia hits from before the Pinochet dictatorship. The more they played together, the more they began to create a cohesive sound, and before long a new band was formed. Chico Trujillo has gone on to become one of the leading cumbia bands in the world, touring everywhere from Berlin to Chicago and releasing six albums. Their latest effort, Reina de Todas las Fiestas, which translates to “Queen of All the Parties,” brings more upbeat cumbia songs with a new “pan Latin American sound” that includes “an Andean edge, some Argentinean slang, and Mexican fans.”

Some of the standout collaborations on the album are with Banda Wiracocha, Kevin Johansen, and Rebel Diaz. Banda Wiracocha is a thirty-piece brass band from Iquique in the North of Chile. Their specialty carnival music brings a big-band feel to the title track “Reina de todas la fiestas.”  Argentinian pop star Kevin Johansen is featured on “Los nervious que te di” with the chorus sung in unison by all nine members of Chico Trujillo. Rebel Diaz is a hip-hop group from the Bronx led by two Chilean brothers, and they are featured on “Chatito,” a slower cumbia track with a great electronic keyboard part.

Chico Trujillo gave the album a high bar when naming it Reina de Todas las Fiestas, but through their international collaborations, years of experience, and larger than life sound, they proved themselves once again as the kings of cumbia and the queen of all the parties.