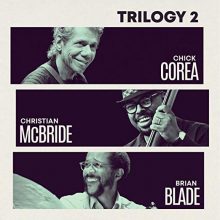 Musician extraordinaire and jazz luminary Chick Corea returns to the stage with jazz giants Christian McBride and Brian Blade on his newest two-disc live recording, Trilogy 2. Released five years after his Trilogy (2014), which won two Grammy Awards for Best Jazz Instrumental Album and Best Improvised Jazz Solo for “Fingerprints,” Trilogy 2 comes as a welcome sequel and features Corea’s originals as well as jazz classics and standards from the American Songbook.

Corea has been a major figure in the jazz industry, and has had an exemplary music career. Highlights of his work include performances and collaborations with Miles Davis, Mongo Santamaria, Herbie Mann, Stan Getz, Roy Haynes, Lenny White, Bobby McFerrin, and many others, as well as international success with his own jazz fusion bands Return to Forever and the Chick Corea Elektric Band. Over the years, Corea has accumulated many accolades including over twenty Grammy Awards and over sixty nominations. In addition to his major achievements, Corea is known for his piano virtuosity, his mastery of jazz styles and jazz improvisation, his prolific compositions and arrangements, and his influential and cutting-edge albums.

Trilogy 2 picks up where the prequel ended, offering a collection that is truly a “treasure trove of sparkling energy and thrilling in-the-moment invention.” Opening with an Irving Berlin composition, the trio takes listeners back to Trilogy (2014) with their reprised performance of “How Deep Is the Ocean.” The trio then shifts gears to Corea’s jazz fusion composition, “500 Miles High,” before transitioning to a Thelonious Monk compilation of “Crepuscule with Nellie” and “Work,” channeling the spirit of Monk through the use of angular and percussive lines, and chromatic dissonance. Other tracks include Corea’s famous classics “La Fiesta” and “Now He Sings, Now He Sobs,” as well as the uptempo rendition of “All Blues” from Miles Davis’ exemplar album, Kind of Blue. A notable mention is the trio’s soulful rendition of Stevie Wonder’s hit, “Pastime Paradise” from Songs in the Key of Life, featuring McBride’s melodic arco solo supported by the light touch of Blade’s brushes.

When describing his various groups, Corea says, “the fun factor is the number one criterion. This trio is incredibly fun. That’s not something you can dictate, but if that’s the experience then the music just flows.” The fun and joyful interactions between Corea, McBride, and Blade, are indeed what makes this album great and enjoyable!

Trilogy 2 is the perfect follow-up, and the sequel jazz fans have long awaited. While the album satisfies listener’s long-time suspense, it will most certainly leave them asking for more (Trilogy 3, please…). This is a must have!