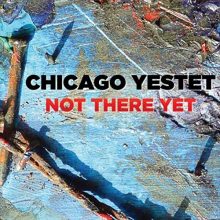 Formed in 2008 by bandleader and trombonist Joel Adams, the 13-piece horn-heavy Chicago Yestet draws from a wide range of genres ranging from big bands of the ‘60s and ‘70s to the sharp-edged political-leaning soul of Donny Hathaway, James Brown, and Marvin Gaye. With the addition of vocalist Maggie Burrell and spoken word artist Keith Harris, the ensemble also incorporates contemporary hip hop influences and socially conscious messaging. On the group’s third release, Not There Yet, they perform eight highly original tracks composed or arranged by Adams, with lyrics contributed by the vocalists.

Opening with the title track, the band lulls listeners with a deceptively smooth groove before Harris enters, spitting a rapid fire commentary on racial profiling, injustice and false arrests: “I guess my melanin is cause to investigate . . . accused me of a crime I didn’t commit, the only reason I’m breathing right now is because I didn’t resist.” Throughout the track, Maggie Burrell and Adams also take solo turns, on vocals and trombone respectively, with Harris returning to summarize, “We’ve made progress American, but we’re not there yet.”  Other tracks, such as “Moment of Truth,” an arrangement of Coltrane’s “Wise One,” and “From This Moment” are more traditional jazz instrumentals that provide many solo opportunities for other band members, including Geof Bradfield and Chris Madsen on tenor sax, Nick Mazzarella on alto sax, Chuck Parrish and Russ Johnson on trumpet, and Tom Garling on trombone, with bassist Clark Sommers, guitarist Mike Allemana, pianist Stu Mindeman and drummer Xavier Breaker heading up the rhythm section. Additional highlights include Harris’s social commentary on “The Long Neglect” and the relationship song “I’ve Been Meaning to Tell You” with Harris and Burrell alternating vocals.

On the brilliant and provocative finale, “Anthem for a New Generation of Sociopolitical Reactionaries,” the ensemble’s subtle reharmonization of “God Bless America” is intertwined with excerpts from Donald Trump’s speeches. In contrast to these often absurd pronouncements, Harris offers fiery verses that speak truth to power as the ensemble weaves in and out between freely improvised dissonance and tightly orchestrated harmonies.

Not There Yet proves the Chicago Yestet is not afraid to celebrate musical diversity as they deftly combine traditional elements of big band jazz, including tight horn arrangements, with edgier elements of hip hop. This is a marvelously engaging and thought provoking album featuring a stellar ensemble that is sure to delight most jazz fans.