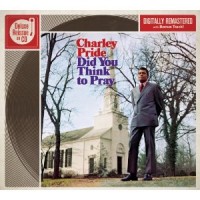 Title: Did You Think to Pray

Throughout much of the 1970s, Charley Pride garnered hit after hit for RCA Records, earning several number one spots and becoming only the second African American country artist to be inducted as a member of the Grand Ole Opry.  His first full-length gospel album, Did You Think to Pray, led to Grammy Awards for Best Gospel Performance as well as Best Sacred Performance in 1972. Now, Music City Records has finally released this Charley Pride classic on CD, completely remastered and with the bonus track “Wings of a Dove,” produced by Chet Atkins.

Did You Think to Pray mixes traditional Southern gospel songs with contemporary fare.  Some of the great classics include “Angel Band” (composed 1862), “Did You Think to Pray” (composed 1876) and the 1930s hymn “I’ll Fly Away,” while songs like “This Highway Leads To Glory” and “Let Me Live” are more recent creations. But whether from the mid-19th century to the late 20th, each song is brilliantly arranged and sung by Charley Pride. Another bonus for country and roots music fans is the participation of The Jordanaires, who provide the vocal accompaniment on “Angel Band” and “This Highway Leads to Glory.”

If you’re a fan of Charley Pride, or if you’re interested in learning more about African Americans in country music, or if you simply wish to hear more recent renditions of Southern gospel classics, Did You Think to Pray is highly recommended.